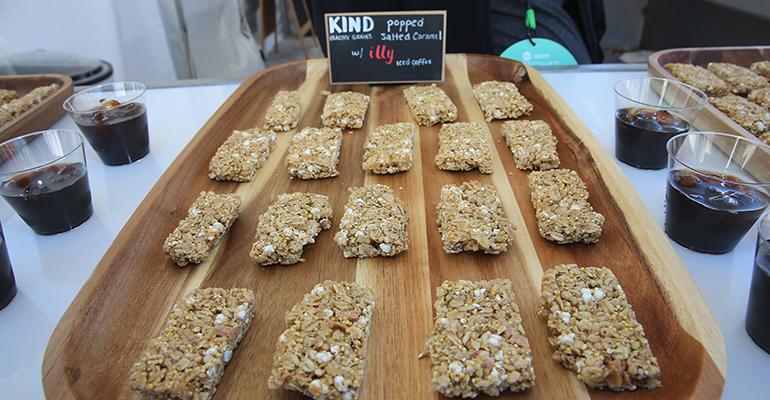 <p>Kind bars can be called healthy, as long as they don&#39;t make specific nutritional claims.</p>
Trends

The term “healthy eating” means many things to many people. Once it was used to describe foods low in calories, fat and carbs; later it referred to natural, organic, sustainable and local products; today, it’s likely to include functional foods and ingredients associated with energy, protein and superfoods.

Research firm Datassential delved into this evolution, the consumer preferences and attitudes that have fueled it and its implications for restaurants, suppliers and retailers. The result is the firm’s "MenuTrends Keynote Report: The New Healthy."

The report combines comprehensive detail from the MenuTrends database with 1,000+ consumer interviews. Among the findings:

• While only 7 percent of consumers say they follow a strict diet, 58 percent believe they need to adopt healthier eating habits. With that in mind, 41 percent said that though they are not on a specific diet, they watch carefully what they eat.

• Consumers say they want healthy options, but their lifestyle choices don’t always jibe with that. One in five never exercise and an additional 27 percent exercise only once or twice a week. Restaurant operators maintain that healthy menu items like salads just don’t sell.

• Restaurant guests aren’t always thrilled about the healthy choices offered. “Consumers told us that healthy options are not always the most appealing,” says Datassential managing director Brian Darr. “Eighty-four percent said they would buy healthy products more often if they tasted better, and a significant percentage noted that they would be more likely to eat healthy if there were a greater variety of healthy offerings. Building healthy positioning around taste and versatility would be a winning strategy.”

• Most operators believe that it is important to call attention to health and wellness options on their menus. Only 17 percent don't. But doing so is probably in their best interest, as long as the message is clear.

“We found that consumers are not always confident navigating healthy terminology such as organic, sustainable or superfood,” Darr adds. “On the other hand, they understood descriptive terms like charred, slow-braised or flame-grilled not only add flavor, but also are a healthier preparation method.”

Meanwhile, the Food and Drug Administration is also trying to figure out what healthy means. Until this month, the agency had used rigid nutritional limits, such as no more than 1 gram of saturated fat, to determine what foods could be labeled healthy. But it reversed a ruling that Kind bars could not be labeled healthy because they contained too much saturated fat.

“Kind fought back, pointing out the absurdity of FDA’s position, and pointing out the evolution of nutrition science over the past two decades," says Chip Magid, a partner at law firm Dorsey & Whitney.

The agency decided Kind could label its bars healthy, as long as the word is used only as a general statement and not as a specific nutritional claim.

“Importantly, though, FDA also said that it was reevaluating its regulations concerning nutritional content claims—including the use of “healthy”—in light of what the FDA termed 'evolving nutrition research' regarding what foods are truly healthy,” Magid says. “FDA’s move will likely lead to a pause in the extensive litigation against the food industry regarding allegedly deceptive ‘healthy’ labeling, as the courts wait for FDA to take a position," he adds.