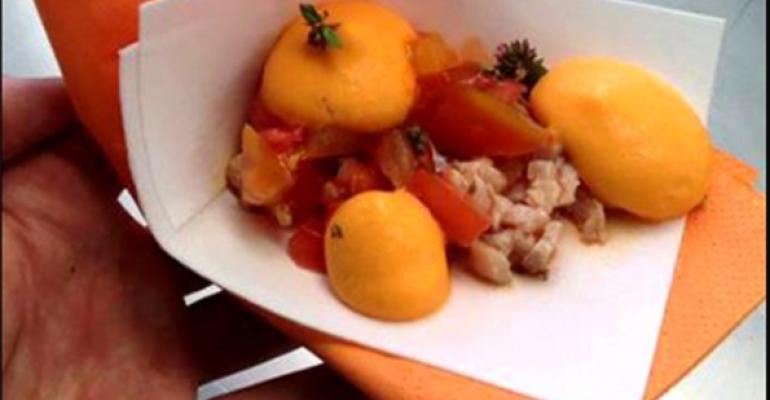 Every citizen of water-starved Fort Bragg, CA, is hoping the epic rainfall forecast to accompany this winter’s El Nino comes soon. And it definitely can’t get here quick enough for this California coast town’s full-service restaurant operators. By order of city council, they’ve had to feed guests using flimsy disposable cups, plates and flatware since Sept. 30.

One signal that California’s multiyear drought situation has gotten critical is that a city, desperate to reduce water consumption, now mandates a certain type of tableware for restaurant use. But that still doesn’t make it a good idea. Fort Bragg’s initial emergency order was in effect for only two weeks before city council changed the language to make it less restrictive. The wording was amended so that the use of disposable tableware, originally a requirement, was downgraded to “encouraged.” Also changed: the word “disposable,” which now reads “compostable.”

Impetus for new language came from full-service operators, particularly those on the higher end. They weren’t happy with the original ruling.

“You might be able to cut a filet mignon with a plastic knife, but you are not going to cut a New York” is how Silvers at the Wharf and Point Noyo Restaurant and Bar co-owner Jim Hurst summed it up for the San Francisco Chronicle. “The expense is going to be horrendous. It seems to me there are other ways to save water.”

Another operator felt throwaway tableware would be a turnoff for customers, particularly those expecting a fine dining experience.

“I’ve found that the customers are very good sports about this,” said Cucina Verona owner Joseph Harris.  “In other words, when they get the $50 bottle of wine served to them in plastic cups, they don’t complain. Lots are very understanding, but they may not want to repeat that.

“I feel there will be a long period of recovery. It will take a long time to get that out of the public minds. The damage has been done. They’re understanding, but next time they’’ll make travel plans elsewhere because they’re not going to come to a disaster zone for their holiday.”

Although disposable foodservice tableware products were held out as the solution by Fort Bragg’s city officials, they’re seen as part of the problem in NYC. The issue isn’t disposables per se, but the compostability of certain disposable items. Some products frequently used in takeout situations don’t pass this test.

After much discussion, New York’s Department of Sanitation banned plastic foam containers on July 1, 2015. This controversial order didn’t last long, being deemed “arbitrary and capricious” by New York State Supreme Court judge Margaret Chan in late September. Because strict enforcement of this law had not yet begun, most restaurant operators had yet to source new forms of compostable takeout packaging. But if this issue returns, they might want to look at the line of edible dishware marketed by Belgian startup firm Do Eat.

“At the end of 2013, after doing a lot of research, we decided to start Do Eat with small edible food containers made out of potato starch that we called verrines,” Do Eat writes on its Kickstarter page. “Fast forward one year and thanks to a business incubator and a successful fundraiser, we have now conquered the Belgian and French markets and are supported by many Michelin-starred chefs. We have sold 250,000 products so far.

Interested readers can see the company’s current product lineup on its website. Right now, Do Eat verrines are available in four shapes: tulip, spoon, lotus and boat. They can be purchased on the company’s website, where a pack of 25 in any shape goes for about $11.

Do Eat also sells half-price versions creative cooks can shape into containers on their own. If you produce a lot of hand-held items for cocktail receptions or are seeking a clever presentation for your restaurant, this option might be worth a look. One possible drawback: the Do Eat verrines must be used within two hours after they’ve been filled with food. “After this time the verrines begin to collapse,” the company says.

Do Eat’s Kickstarter campaign didn’t fund. But the company’s big idea—make compostable containers and tableware cool—could still have legs, particularly if the technology could be adapted to produce takeout containers or plate-like shapes. If Do Eat could make items like these available in large numbers, it could find a market in the U.S. in places where compostability matters such as NYC and, if it’s still water-starved, Fort Bragg.