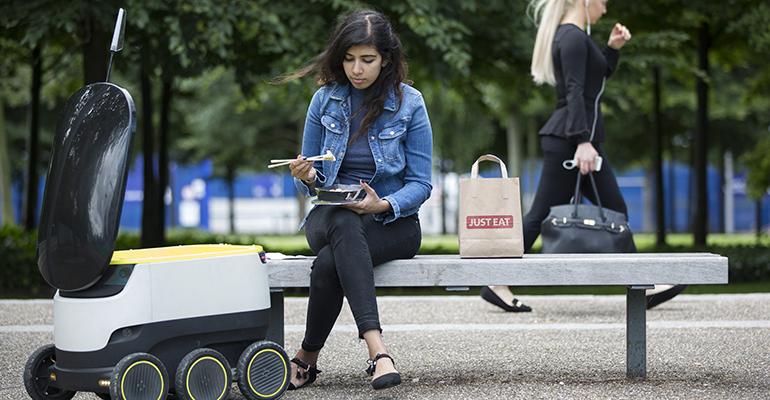 <p>Robots and other forms of restaurant delivery gratify the &quot;I want it now&quot; attitude of younger restaurant customers.</p>
Trends

One notable trend is giving full-service restaurants an edge over their quick-service rivals: Delivery orders are up, while drive-through traffic is declining, according to research firm The NPD Group.

Over the past four years, delivery has grown by 69 million visits (orders), while drive-through visits fell by 128 million, according to NPD.

The growth in foodservice delivery is even greater when you remove pizza delivery from the equation. Pizza orders still comprise over 60 percent of foodservice delivery visits, but traffic has declined by double digits over the last four years. Consumers instead are ordering delivery from a variety of restaurants, including quick-service Asian and burger, full-service and fast casual, finds the NPD report, "Delivery: A Growth Opportunity on the Horizon."

What’s behind the switch? Delivery options are especially important to Gen Z and millennials. Together, these two groups represent half of the U.S. population, a large target group who will drive the growth in delivery far into the future. These consumers want to eat their favorite food when they want it, regardless of where they are, as well as order and pay for it with the click of a button.

If you're eager to join the game but don't know where to start, plenty of third-party providers are happy to step in, and the options for getting food from your kitchen to your customers’ homes continue to expand. Among recent developments:

• In Europe, this summer the delivery app Just Eat is testing robots developed by Starship Technologies, an Estonian startup from several Skype cofounders. The delivery firm paid the developer to deploy six of the two-foot-high robots to transport meals from several Central London restaurants. If all goes well, Just Eat plans to expand the program later in the year. The robots have already been in use in London, Berlin and Tallin, Estonia. Just Eat contends the robots are meant to supplement, rather than replace, human drivers during peak periods.

• UberEats joined an already crowded field of meal delivery services in Miami. The idea is to tap into the local popularity of Uber’s transportation service, although UberEats customers need not register with Uber. Deliveries—done by the 10,000 Uber drivers in the area—will be available between 8 p.m. and midnight. For now the service is free, but eventually it will ramp up to $4.99 per order.

• Amazon is expanding its Prime Now one-hour restaurant delivery service to more cities. Prime customers can get food from dozens of local restaurants delivered free in about an hour using the company’s Prime Now app. Today the service is available in a handful of cities across the country, including Portland, Los Angeles, Chicago, Austin and now San Francisco, another hotly competitive market for restaurant delivery.

“If delivery fits a restaurant operator’s business model and is operationally feasible, now is the time to consider adding it as an option for customers,” says Bonnie Riggs, NPD Group’s restaurant industry analyst. “It’s one way to stay competitive and relevant in a low-growth foodservice environment. However, before moving ahead with a delivery program, it is important to understand the growth opportunity along with the potential barriers to use that might exist from the consumer perspective.”