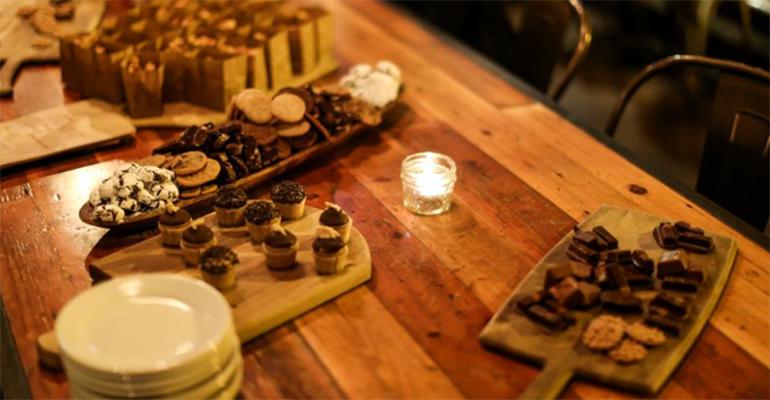 <p>Chicago chef Mindy Segal was one of the first to create edible pot products.</p>
Trends

Trendinista: Can restaurants profit from an edible cannabis boom?

So far, only a couple of entrepreneurially minded chefs seem ready to profit if one or more of the five recreational marijuana initiatives on state ballots this November becomes law. But now that we’re learning more about the size, scope and eye-popping margins of the legal marijuana market — and the importance of edibles in it — others could jump on the bandwagon soon. Factor in the states where pot is already legal (Colorado, Washington, Oregon, Alaska) and it’s clear that legal marijuana is on the verge of going mainstream.

How far into the mainstream are we talking? You’ll have to head to Oregon to find out. Less than two years ago, marijuana producers there would be charged with felonies if caught growing cannabis on their land. This year, award-winning cannabis plants were on display at the Oregon State Fair. “The top growers will become the nation’s first-ever winners of a state fair ribbon honoring a farm crop outlawed by the federal government,” notes the Los Angeles Times.

Marijuana-infused edibles are a big part of this budding market. But there’s a lot more to making them than just adding weed to brownie mix, and therein lies the opportunity. Companies already in the edibles business are experts at controlling dosage and potency to create the desired effect. But many struggle to produce the tastes and textures customers crave, and there are few reliable brands. It’s a market ripe for exploitation by skilled chefs and high-profile restaurant brands.

California is the prize. “California is the sixth largest economy in the world. The opportunity for jobs, tax money and wealth creation made possible by California ending marijuana prohibition cannot be overstated,” says Troy Dayton, CEO of cannabis market research company Arcview Group.

It’s a huge opportunity, but chef- and restaurant-backed ventures are few and far between.

On the fine dining front, chef Chris Sayegh is already tapping this market via his Los Angeles-based company, The Herbal Chef. He caters high-end meals ($300-$500 a head) to medical marijuana card holders there.

"Cannabis is not like any other ingredient," he says. "You have to be extremely careful because not only does heat play a very important role when cooking with cannabis, but you're also taking people on a trip, literally, and you have a responsibility to make sure it's done right. I am literally changing people's brain chemistry as the dishes go on,” he tells France24.

James Beard Award-winning pastry chef Mindy Segal was the first to dive into the edibles part of the legal marijuana market. She may soon be joined by chefs, molecular gastronomy practitioners and other restaurant world entrepreneurs who read an eye-opening new report from “Cannabis Intelligence” firm Headset. The firm looked at its transaction data set from cannabis retailers in Washington state and came up with these tantalizing results.

• Overall, edibles account for 13.1 percent of the market, which makes them second only to “flower,” i.e., traditional marijuana buds consumed by smoking.

• The average profit margin for the edible product category: 56 percent.

“The margins on making cannabis easier to consume are high,” Headset says. “While flower is the most popular product, it is the least profitable product category for retailers.”

Headset’s numbers on edible sales are conservative by marijuana industry standards. Other estimates suggest that high-margin edibles make up as much as half of the legal marijuana market.

If you live in a state where pot is or could soon be legal, you might want to figure how your food-making skills, perhaps combined with your personal and/or your restaurant’s brand, can get you a piece of the action. If you ever wanted to get in on the ground floor of a lucrative and fast-growing market, this one might be it.