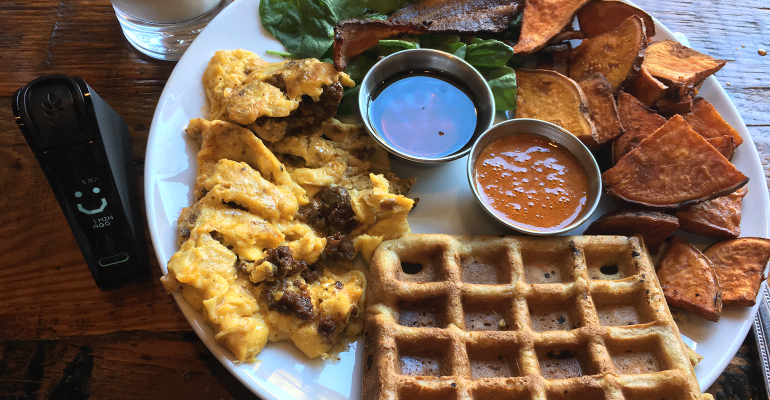 Restaurant operators should prepare for a rise in gluten-free diners armed with devices.

It’s about to happen with the arrival of Nima, a portable sensor that performs highly accurate on-the-spot tests measuring the presence of gluten, or lack thereof, in food.

Nima is the first to market, but other similar sensors are in development, like the Tellspec, which is still in beta test. Hand-held consumer devices capable of detecting other food allergens — peanut, dairy and tree nuts — could come next.

Restaurant operators already go out of their way to make sure food served to those afflicted with celiac disease or who are otherwise gluten-sensitive is indeed free of gluten. Many restaurants offer a short menu of gluten-free items or provide special formulations of signature dishes to accommodate these groups. Quite a few put both front- and back-of-the-house staffers through ServSafe’s online allergens course to further protect against potential food allergy incidents.

“From our early app data, we are finding that about 30 percent of foods labeled gluten-free are testing positive for gluten with Nima,” said Shireen Yates, CEO of 6SensorLabs, the device’s maker. “This data highlights the struggle millions of gluten-free diners face today.”

Millions? It’s tough to come up with an exact number of people who have this condition. Celiac disease affects one in 133 Americans. A much-larger number of people—somewhere between 0.6 to six percent of the U.S. population—claim they have “non-celiac gluten sensitivity,” or NCGS. The symptoms displayed by this latter group are real, but the cause and effect isn’t clear-cut. Some people just seem to do better when they remove gluten from their diet.

“Doctors came up with a name for it,” says the Celiac Support Association’s Mary Schluckebier about NCGS. “I think it was a way to appease patients. I don’t know how to say that nicely.”

The key takeaway for operators: A sizable number of customers show up at restaurants fearing they’ll inadvertently get food that will cause a bad reaction in their bodies.

Enter the Nima. It’s a tabletop testing device that can detect the presence of gluten down to the fewer than 20 parts per million standard set by the Food and Drug Administration. While accurate, this pocket-sized unit is neither fast or cheap.

The device retails for $279 and each test requires a one-time-use capsule that costs about $5. The manufacturer notes that a test takes “between two or three minutes.”

Customers place a small sample of food in the capsule and results are shown on a display that produces either a wheat symbol (too much gluten) or a smile emoticon (confirming a food sample contains fewer than 20 ppm of gluten).

Nima is viewed as a godsend by some celiac suffers and those who identify as gluten-sensitive. But the practical aspects of its use in a restaurant setting could raise several issues for operators.

Timing is one. Nima needs only a couple of minutes to analyze a sample. But that time gap could cause many items served hot to be lukewarm by the time they are actually consumed.

Second, Nima reports on a small sample of a meal, not the entire serving. So the sample could indeed be gluten-free, while the remainder of the dish might not be. Or vice versa.

The sensor also cannot accurately test all foods. The Nima won’t work on certain ingredients, like beer, for example, or fermented or hydrolyzed foods, the manufacturer states.

According to celiac disease advocacy group Beyond Celiac, Nima is still going through third-party validation and results have not been published in a peer-reviewed journal.

It’s a hospitality challenge like no other, and could be an occasion wrecker for the rest of the people at the table, not to mention other parties seated nearby. Good luck if you’re the manager who has to approach a table like this and try to make things right.

Cross-contamination and/or user error could be problematic, too.

“I could see it being tough to keep contaminants away from your sample when you’re in a restaurant or other social environment,” wrote Ashlee Thompson for CNET. “So, in theory, a stray bread crumb on your restaurant table could skew your test results if it contaminates a bit of food that really is gluten free.”

Nima maker 6SensorLabs acknowledged that some tricky situations will likely occur. An extensive restaurant-specific frequently asked questions section on the company’s website is designed to put operators’ minds at ease, but the “Do’s and Dont’s” list may have the opposite effect.

No matter. You can bet that celiac disease and NCGS sufferers will buy Nima devices, and others like it that no doubt will come to market, and use them while dining in restaurants. Be ready to accommodate when they do.