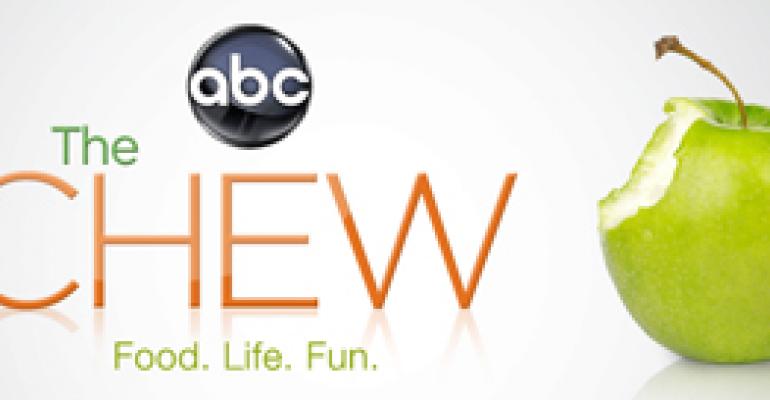 What The Chew Will Do For You

Mario Batali and Michael Symon are asking for it. This fall, these media-genic chefs will debut a live, mid-day food-based talk show—The Chew, same network (ABC) and format as The View—in a time slot held down for decades by soap operas All My Children and One Life to Live. Might The Chew crew stir up extra business for your place?

Professional cooking is grueling, physical work, which is why the select few chefs who wind up cooking for a mere hour or so on television have arguably the best jobs in the industry. Or at least they used to. Now the very best jobs will involve no more than sitting on one’s duff and chatting about cooking for an hour a day, 39 minutes an episode when you allow for commercials. It’s nice work if you can get it and Food Network personalities Mario Batali, Michael Symon and frequent Top Chef participant Carla Hall will have it five days a week this fall.

Who will be watching them? Good question. ABC is hoping The Chew attracts a younger demographic than the old-timers who doted on All My Children and One Life to Live for so many years. That’s what advertisers want now.

But watch out. Faithful viewers of these soon-to-end soaps have vowed to extract revenge on ABC for cancelling their shows. Batali and Symon are going to have to work hard to attract a different set of daytime viewers. It will be interesting to see if these two chefs can make the leap from taped cable television shows to appearing live everyday—for a full hour—on a network.

Let’s hope they do. We should all be praying that The Chew is a big hit. This show has a chance to drive new interest in restaurants and the people who work in them as perhaps no show has before.

Here’s the official description of The Chew put out by ABC when they announced the new show:

Guided by extensive research into what today’s daytime viewers want and the changing viewing patterns of the audience, ABC is evolving the face of daytime television with the launch of two new shows, The Chew which will premiere in September 2011 and The Revolution (working title) which will premiere in January 2012. These new shows expand ABC Daytime’s focus to include more programming that is informative and authentic and centers on transformation, food and lifestyle -- cornerstones of programming that resonates with daytime viewers as evidenced by the success of The View.

“As food has become the center of everyone’s life, The Chew will focus on food from EVERY angle - as a source of joy, health, family ritual, friendship, breaking news, dating, fitness, weight loss, travel adventures and life's moments. Produced by Gordon Elliot, the Emmy award winning executive producer of Paula Deen’s Home Cooking and Down Home With The Neelys, this new one-hour series combines entertaining takeaway with memorable personalities to create a live show where viewers get the dish on anything and everything related to the world of food and beyond.

“Whether it’s new trends like food trucks and urban gardens or how pesticides in our food may affect our health, we can’t stop talking about it. The hosts who will guide the hour include Mario Batali (Restaurateur, Food Network’s Iron Chef America and author); entertaining expert, Clinton Kelly (TLC’s What Not To Wear), Carla Hall (Bravo’s Top Chef); Michael Symon (Restaurateur and Food Network’s Iron Chef America) and nutrition expert Daphne Oz, who simplifies often-confusing information about food.

“While we are excited about our new shows and the shift in our business, I can’t help but recognize how bittersweet the change is,’ said Brian Frons, President, Daytime, Disney ABC Television Group. ‘We are taking this bold step to expand our business because viewers are looking for different types of programming these days. They are telling us there is room for informative, authentic and fun shows that are relatable, offer a wide variety of opinions and focus on ‘real life’ takeaways.”

Let’s hope a lot of those real life takeaways involve going to your restaurant to buy a dish they learned about on The Chew.