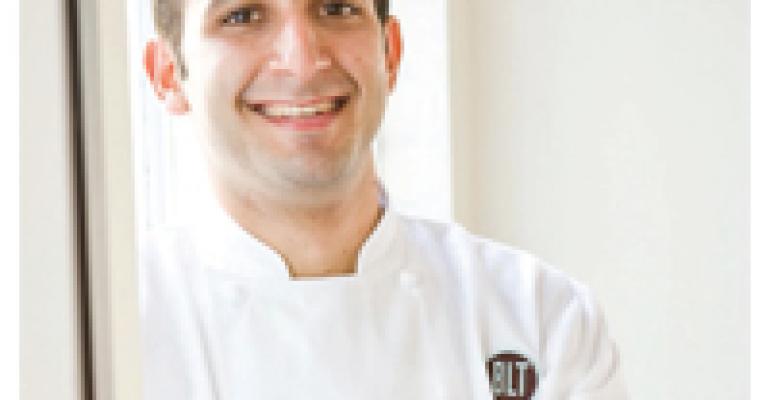 It came as a surprise to some that celebrity chef Laurent Tourondel, one of America's most respected French imports, would tap a 26-year-old kid named Samuel Gorenstein to head the kitchen at one of his ultra high-profile restaurants. But Tourondel — who has created a multi-unit empire of highly regarded Bistro Laurent Tourondel (BLT) properties — knew exactly what he was doing.

Back in 2004, Gorenstein moved from his adopted hometown of Miami to work with Tourondel at Union Pacific in New York City. Tourondel was so impressed with this Colombian-born kid that he asked Gorenstein to be part of an opening team that put one of his concepts, BLT Fish, on the map with a three-star review from the New York Times.

In 2006, Gorenstein returned to Miami and got a gig as sous chef at Michael Schwartz's highly acclaimed Michael's Genuine Food & Drink. A couple years later, Tourondel's growing restaurant empire spread to Miami, where he asked Gorenstein to join him and take the helm at another of his concepts, BLT Steak, in the historic Betsy Hotel on South Beach's Ocean Drive.

Usually, a chef of Gorenstein's talent is not called upon to drive a steak concept, but Tourondel knows how to protect his brand and he knew the kid could take a traditional, albeit upscale steak concept to another level on his own. And this is exactly what Gorenstein has done with a daily blackboard menu, which features local, seasonal fish specials. It was those blackboard specials and his work with fish that got Gorenstein nominated as last year's James Beard Rising Star Chef. That honor eventually went to another chef, but keep in mind that Gorenstein is only 26 years old.

With such a talented chef in place, and one who has such skill with fish, you have to wonder if Tourondel is considering a unit of BLT Fish in Miami with Gorenstein in the kitchen. The truth is, Ocean Drive is a tourist hotspot that lacks culinary sophistication. Steak concepts have traditionally done well in the area, while seafood places have not. But the area has matured culinarily in recent years, and we can't help but think a seafood restaurant with Gorenstein at the helm would make a big splash.