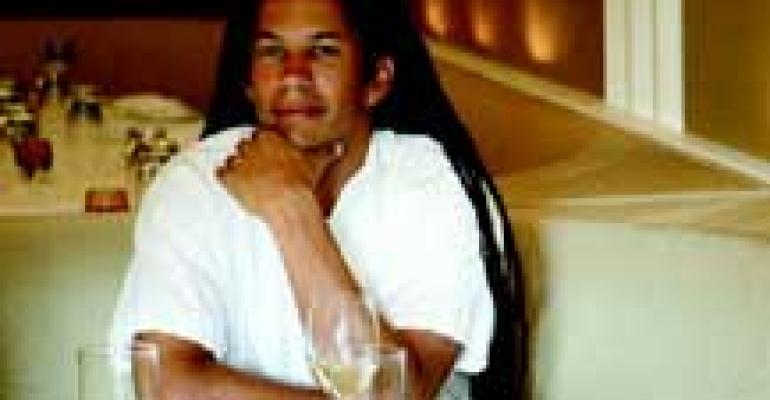 The dude with the waist-length dreds isn't into body piercing. You might think so after seeing him walk into 7661 Melrose every day. But this is L.A., man, where an ultra-hip restaurant can sit comfortably beneath a body-piercing parlor in a ragged part of town. The dude in question is 34-year-old Govind Armstrong, who has recently become the darling of L.A.'s revitalized culinary scene. In a city that's long been ruled by form over function, Armstrong proves daily at Table 8 that he's not just another pretty face in the land of the beautiful people. By age 13, he had apprenticed with Wolfgang Puck at Spago, and then went on to work with other L.A. culinary gods, including Mark Peel and Nancy Silverton at Campanile, Mary Sue Miliken and Susan Feniger at City, and Joachim Splichal at Patina. His most recent gig was at L.A.'s Chadwick, where he collaborated with Ben Ford, Harrison's son and another RH Rising Star. The two produced smart, seasonal cooking based on daily finds at farmers' markets. Armstrong is following suit at Table 8 (named for the table at Chadwick where he and his two New York City partners dreamed up the restaurant). The Los Angeles Times sums it all up: "After years of cooking in somebody else's kitchen, Armstrong has matured into an assured chef who has a kitchen perfectly tuned to his pitch."