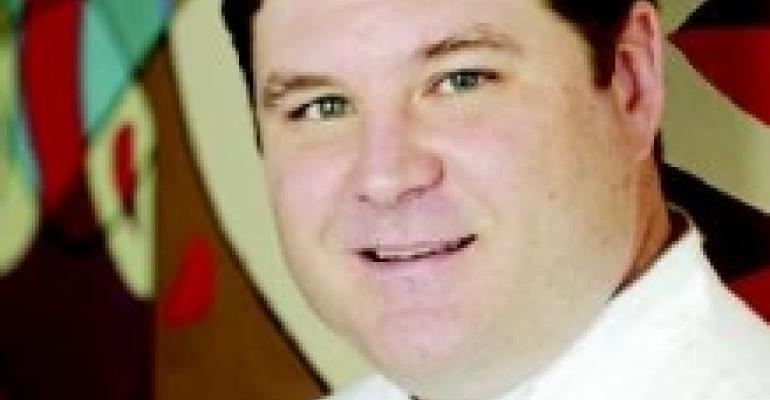 Back in February, Michael Cimarusti, who put L.A.'s Water Grill on the map, was featured on the cover of this magazine when he left to open Providence, another great seafood joint. Hearts sank when he motored out of Water Grill, but in his wake came Chef David LeFevre, 32, who has so impressed the critics that Water Grill continues to be mentioned in the same breath as New York City's Le Bernardin and San Francisco's Aqua.

As a teen, the Wisconsin native studied to be an industrial engineer, but got the fever and enrolled in the Culinary Institute of America. With a degree in hand, he landed in Chicago at the famed Charlie Trotter's, where he interned before heading to Trotter's now-defunct Las Vegas outpost.

After Vegas, LeFevre packed his bags for France, where he interned at several Michelin-starred venues, including Roger Verge's Le Moulin de Mougins. When LeFevre returned, Trotter put him to work as a line cook at his Chicago flagship. Before long, he was made sous chef and then executive sous chef.

Under Trotter's guidance, LeFevre participated in more than 50 national and international culinary cooking events, and he contributed both to Trotter's cookbooks and PBS television series.

He then left Trotter's for a twoyear culinary tour of four continents, which included cooking stints in Singapore, Bangkok, Stockholm and Tokyo. These influences are seen in his cooking today at Water Grill.

The Los Angeles Times wrote that under LeFevre, Water Grill is one of the best seafood restaurants in the country. ". . . Chef David LeFevre has a radical approach to cooking fish: Take it nice and slow. The results are sublime." Los Angeles Magazine concurred, saying "Water Grill's kitchen is in good hands."