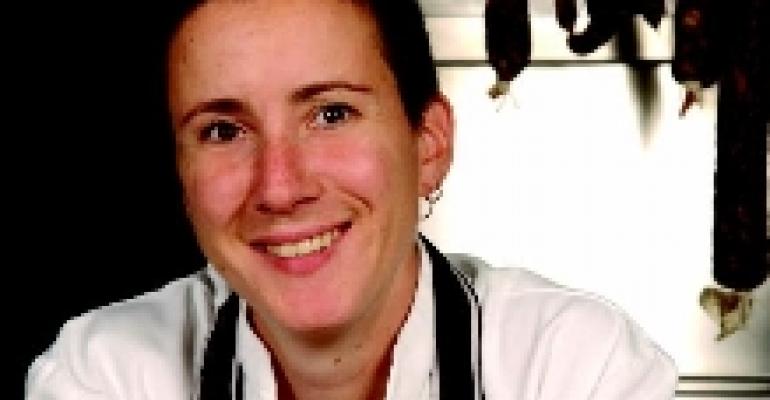 When you ask chefs where they eat in Chicago, Blackbird is almost always at the top of the list. So when it was announced sometime back that Chef Paul Kahan was opening a wine bar next door called Avec, a sense of excited anticipation overtook everyone who cares about great eats. As expected, reviews of this new hot spot are over the top. "The food at Avec is so good, I want to eat there every day," wrote Chicago Tribune restaurant critic Phil Vettel. The talent behind the menu is chef de cuisine Koren Grieveson, who works in collaboration with Kahan. She's been the sous chef at Blackbird since 1998. Born in South Africa, Koren graduated from the CIA in 1996 and then worked with several culinary whizzes, including Michael Mina at Aqua in San Francisco, and in Chicago with Keith Luce at Spruce and Suzy Crofton at Crofton on Wells. Avec means "with" in French, which is an apt description because customers are urged to drink wine with their food at communal tables with friends and neighbors. Koren's menu is decidedly Mediterranean, and much of it is for sharing. She offers more than a dozen "small plates," including pan-fried sardines with crispy Serrano ham and Lucques olives tapenade. A variety of "large plates" are also available, including bourride, a poached fish stew with fennel, garlic, saffron, aioli and crushed bread. It's not often in this country you'll find hand-crafted salumi on restaurant menus, but each day Koren makes five excellent styles, which one can order on a sample platter that comes with a small pot of French mustard and cornichons. Clearly, Koren has arrived on the culinary scene with incredible talent.