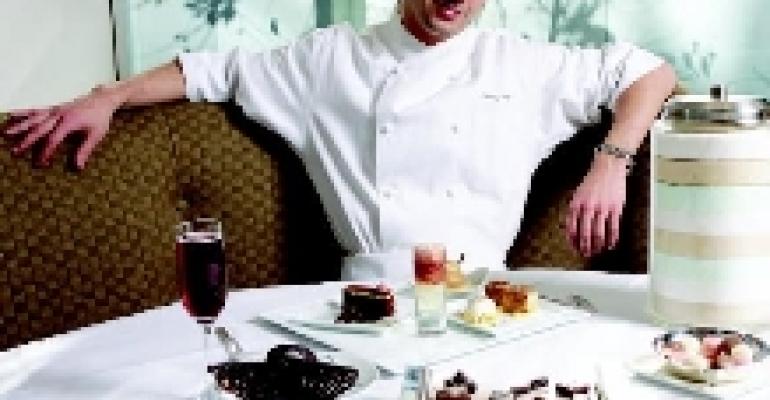 Johnny Iuzzini is undoubtedly a culinary rising star, though with his Hollywood good looks and bad-boy reputation, he could easily be mistaken for a rock star. . . you know, the kind that will stop traffic in a hotel lobby and then, later that night, trash his suite. When he worked for Daniel Boulud at Restaurant Daniel, Iuzzini and a couple of likeminded cohorts were known as the Pyramid of Darkness. Once a notorious club kid known as Johnny Quest, he's still pushing the envelope. His whimsical nature was apparent when he appeared in New York magazine earlier this year covered in Marshmallow Fluff. With all this said, don't think for a second that Iuzzini isn't a world-class pastry chef, now holding court at another New York culinary mecca, Jean Georges. Before his work at Restaurant Daniel, Iuzzini learned his craft at Payard Patisserie and Laduree in Paris. Now that he's jamming loud and hard at Jean Georges, the notices are flowing in. Pastry Art & Design put him on its list of The Ten Best Pastry Chefs, and he was nominated for Outstanding Pastry Chef by The James Beard Foundation. Iuzzini no longer shows up at work with blond-spiked hair like Billy Idol, but don't be fooled by this sugar-fueled mad genius. He's going places, and he's going to do it his way.