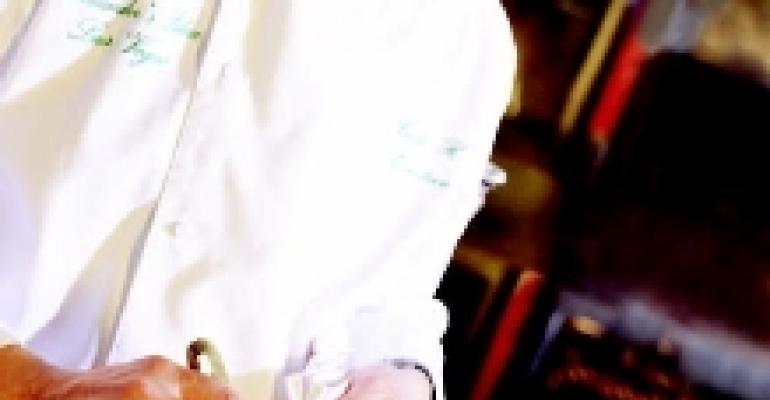 If the Brennans of New Orleans were a baseball franchise, they'd have to be the Yankees. Simply put, they've got the clout to draft and hire only the best players. The Brennans, hopefully, will forgive us for comparing them to the Yankees, but when you consider all the bigname major league chefs who have joined their team—Prudhomme, Lagasse, Shannon—you'll see what we mean. Well, their newest breakthrough player is Carlos Guia, who now runs the kitchen at the Las Vegas outpost of Commander's Palace. Prior to joining the Brennans, the Venezuelan-born Guia worked at the Waldorf-Astoria in N.Y.C., and then took off to Europe to apprentice under French Chef Georges Blanc, English Chef Marco Pierre White and Belgian Chef Roger Souvereigns. Returning to New York, he landed jobs at Le Bernardin and Lutece, before getting the nod from the Brennans to work in and, eventually, take over the kitchen at Palace Cafè. Now in Las Vegas, Guia and Commander's are getting rave reviews, including ones from Conde Nast Traveler ("One of the world's most exciting new restaurants"), Food & Wine ("This branch of the New Orleans institution rivals the original"), and Las Vegas Life ("The menu by Chef Carlos Guia . . . and the whole Commander's experience is hard to top.") —