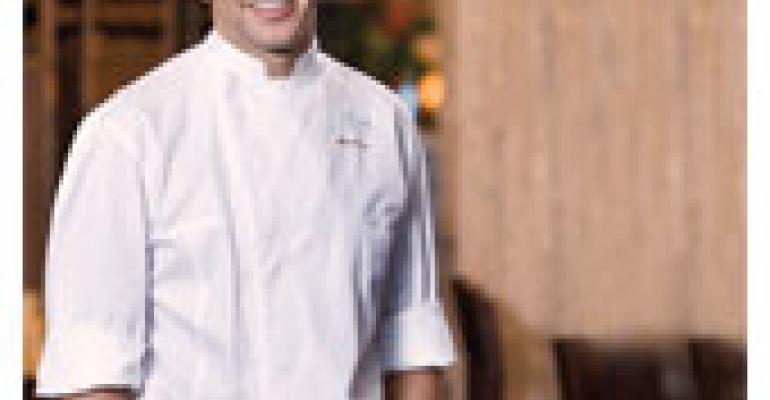 It wasn't long ago that two of America's great destination cities — Miami and Las Vegas — were short on great dining options. Vegas pulled a spectacular 180 by importing celebrity chefs from around the country and world, while Miami has relied more on emerging talent to up the ante. Consider, for example, Barcelona-born Marc Vidal, who recently took the helm of Solea, the signature restaurant of W South Beach Hotel.

Named one of Spain's top young chefs in 2005, Vidal grew up in Barcelona at his family's restaurant. His love for food and the business eventually led him to a pair of culinary degrees and a desire to work with the best in Europe. With a resume that included stints with three iconic chefs — Alain Ducasse and Alain Passard in Paris, and Ferran Adria in Spain, Vidal demonstrated that he could take his talent anywhere.

And he did. In 2007 he accepted an executive chef position at Por Fin in Coral Gables, where critics raved about his blend of modern and traditional Spanish menu items. And now in a city where style often usurps substance, the 32-year-old is demonstrating a culinary maturity well beyond his years. Simply put, Vidal acquires the best ingredients on a seafood-heavy menu and allows them to sing with a minimum of interference.

Consider his pica-pica (small bites) menu, which includes items such as Serrano ham croquettes with aioli sauce; fried baby whitebait fish with fried egg; and cod fritters with romesco sauce. Simple and delicious. Vidal is also a master with rice, and his paellas, including one with lobster, clams and chanterelle mushrooms, are terrific. While he clearly excels with seafood (larger plates include sea bream with potatoes, onion and guindilla-garlic vinaigrette), his braised veal cheeks with porcini-Idiazabal cheese toasts are crazy good.

Marc Vidal does not yet have the star power of others in Miami, but if he sticks around, his talent will surely get him the notice he deserves.