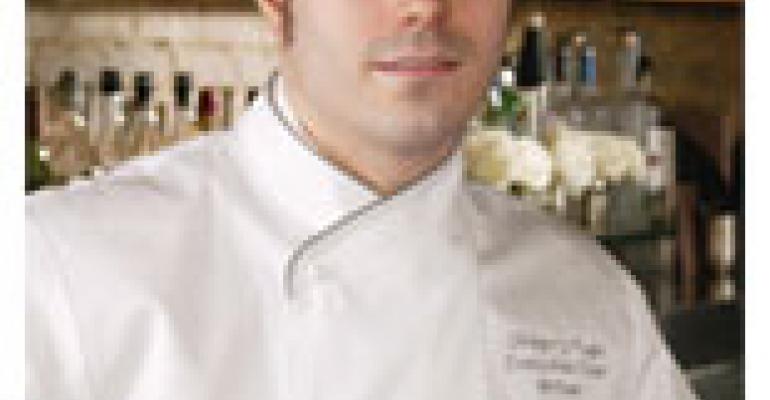 New York City's Veritas does as good a job as any restaurant at creating an atmosphere where customers are comfortable ordering wine, which is no small feat considering its 3,600-bin wine list. And neither is it easy creating a menu that can significantly hold its own against such a powerhouse wine list. Yet, Veritas has accomplished both tasks admirably over the years because the owners acquire talent as well as they acquires fine bottles of wine.

Its latest culinary star is Gregory Pugin, a protégé of Joël Robuchon. His menus at Veritas reflect his roots in Southwest France, and the results are a beautiful marriage of food and wine. He has created three-, five- and nine-course menus based on seasonal funghi (spring morels, summer chanterelles, fall white truffles and winter black truffles). But he has also developed a rustic à la carte bar menu for customers who want a more casual experience.

Pugin spent eight years working with Robuchon, both at his culinary lab in France and later at L'Atelier de Joël Robuchon in New York City. He began his culinary apprenticeship at age 17 in France's Basque region with celebrated chef Jean-Marie Gautier at the Hotel du Palais. In 2005, Pugin received the Compagnon du Tour de France, one of France's highest culinary honors.

Veritas was never designed for the meat-and-potatoes crowd, which explains its desire for a chef with a pedigree. Yet what could be one of the country's more intimidating restaurants is somehow approachable and comforting. For that you can thank its owners — Park B. Smith, Tim Kopec and Gino Diaferia — who know how to keep it real. As for the talented Pugin, he is the real deal.