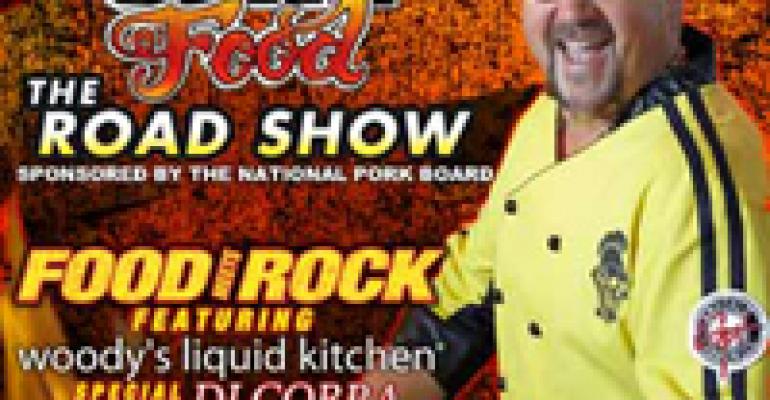 Feeding The Guy Fieri Fan Base

Online ticket brokers already show a bustling aftermarket for tickets to the upcoming Guy Fieri Food Tour Presented By The National Pork Board. Good for him. But is there a way other operators can cash in on the enthusiasm this 15-cities-in-22-days culinary extravaganza will kick up?

Wondering how the 2009 edition of the Guy Fieri road show turned out? It must have been a winner, because the restaurateur/chef/TV personality is going out on tour again in 2011, and ticket speculators have already snapped up prime seats in the hopes of reselling them online at huge markups.

Fieri’s 2011 tour has been scaled back from the first one—to 15 cities, down from 21 in 2009—but he promises the energy level will duplicate that of the original. Each night’s show “will mix the best elements of a live cooking show, the fun of a variety review and the non-stop adrenaline rush of a rock concert.”

What’s most interesting this time around is that the National Pork Board, which refers to Fieri as a “pal of pork,” is sponsoring the tour. It’s almost like having a guarantee that the enterprise will turn a profit.

Real rock stars often get tour sponsorship—Lexus gave Paul McCartney $5 million in 2005; estimates are that Budweiser’s backing of the Rolling Stones’ 1989 Steel Wheels tour equates to $10 million today. But Fieri’s act is cooking, not music, so he’s breaking new ground here. We don’t know how much money his agent at the William Morris Agency got from the Pork Board, but the simple fact that Fieri can score a full tour sponsorship puts him into the stratosphere of live acts.

Does sponsorship mean that tickets will be cheaper? Nope, the event is priced a lot like the first go-round. For example, admittance to the show to be held at the Midland Theater in Kansas City ranges from a $35 general admission to watch from the bar in the back of the theater to $250 for an “Off Da Hook” package that gets the ticket bearer a seat on the stage, a chance to sample the food Fieri prepares during the show, a laminated poster of the tour, a copy of the new book Guy Fieri Food, and a preshow meet-and-greet with Fieri himself. If you’re willing to part with $150, you get the same benefits as the Off Da Hook package, only your seat is in the orchestra and you don’t get to sample the food.

Of what exactly does this show consist?

“Fieri will take center stage with an unscripted and wildly entertaining performance, complete with interactive cooking stations, secret tips and dishes from his forthcoming cookbook (Guy Fieri Food, due May 3), as well as behind-the-scenes stories from the road, and much more.

“Australia-based flair bartender Hayden "Woody" Wood, entertainer and author of The Liquid Kitchen, will serve as the show's opening act and onstage mixologist. L.A.'s DJ Cobra will spin the show's soundtrack from the comfort of his wild, orange fur-covered DJ booth, starting with the customary introduction of Fieri to the rocking theme of Motley Crue's "Kick Start My Heart."

The show might risk emphasizing style over substance, but go online and check out what the ticket brokers are asking for seats. Many are marked up hundreds of dollars over face price, which tells you how popular Fieri’s act is.

So is his food as popular? This is where other restaurateurs come in. It’s noticeable that the second go-round of Fieri’s tour avoids major population centers on the east and west coasts as well as Chicago. This flyover-country itinerary lets you know where his fan base is and that Fieri’s in-your-face style of cooking has an audience there. If your restaurant is located in or near one of the towns hosting the tour, why not grab a copy of his new book and run a dish or two of his as a special?

Fieri’s fans may not be foodies—think of them as the Silent Majority of the culinary world—but they have plenty of money to drop on the food and food personalities they like. Fieri is a big national act, but he only has five restaurants, all located in Northern California. That leaves the rest of the country wide open for everybody else. If you give his fans a reason to come, maybe they’ll give your place a try.