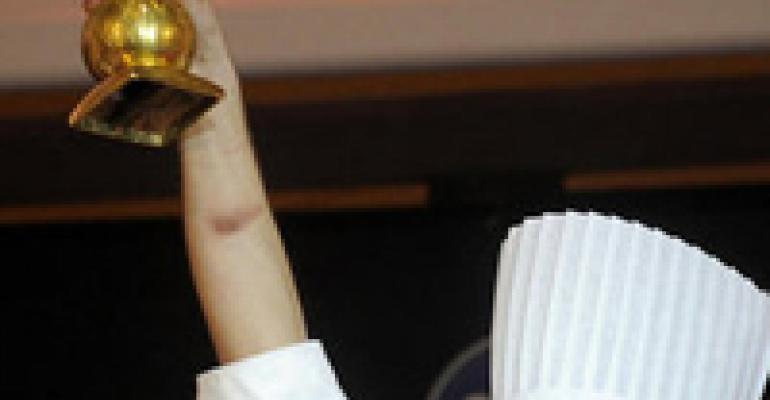 In It To Win It: Bocuse Deadline Looms

Want to see if you can outcook the best chefs in the country and then, maybe, the best in the world? Would your boss pony up $3,000 so you can try? Then get cracking, because the application deadline for the U.S. portion of 2013 Bocuse d’Or qualifying is midnight on May 30, 2011. The U.S. is due for a breakthrough; that person could be you.

Yes, the competition will be tough. But keep in mind that the last two chefs to represent the U.S. at the world finals in Lyon, France, were not big names when they prevailed. The 2011 pick was James Kent, still works at Eleven Madison Park in New York City, where he is one of eight sous chefs in the kitchen. Tim Hollingsworth, now the chef de cuisine at The French Laundry, was the sous chef there when he was the 2009 pick.

This contest is open to anyone who will be 23 years old in 2013, is a U.S. citizen and has worked in fine dining restaurant for at least three years.

• A completed application form (available at www.bocusedorusa.org) to be submitted on or before May 30, 2011. No resumes.
• An essay explaining why the chef applicant is motivated to participate in the competition and should represent the USA in Lyon.
• A current dinner menu from the restaurant at which the applicant is presently employed.
• Two letters of recommendation from chefs and/or restaurateurs.
• A signed competition rules and regulations form.
• A signed letter of intent from the applicant’s sponsor.
• Authorization and release forms signed by the applicant and by the person who will be their commis during the competition. Both need to be notarized.
• Photocopies of proof of U.S. citizenship for the chef and his or her commis.
• A recent and individual high-resolution photograph of the chef and the commis in chef uniform.

The applicant’s sponsor—most likely the chef or owner of the restaurant where an applicant now works—has to send $3,000 with the application. It’s refundable if an applicant is not one of the 12 chefs chosen to participate in the U.S. challenge round.

Expensive? In a sense, but the top three finishers win cash prizes and the overall champ gets to hone his or her skills under the watchful eyes of Daniel Boulud, Thomas Keller and other culinary giants. Winning will be a giant step forward in the career of whomever the judges select.

“This competition is a true test of culinary excellence and we are looking forward to identifying America’s next top culinary talent to represent the country in 2013,” said Bocuse d’Or USA Foundation President Thomas Keller.