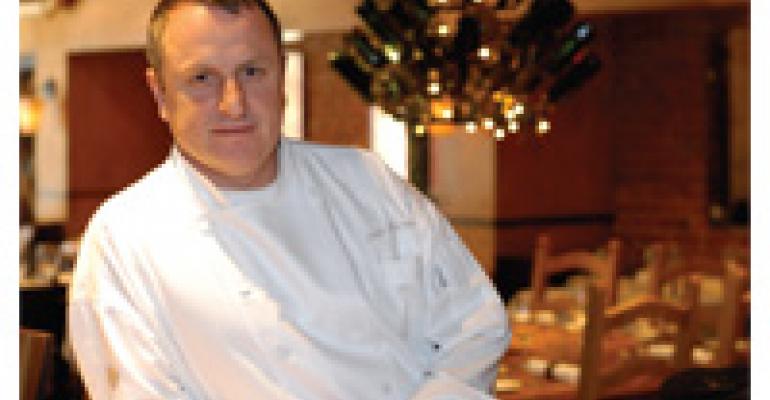 Basque cuisine dominates at the upscale Piperade and the less formal Bocadillos, chef Gerald Hirigoyen's two popular San Francisco restaurants. He arrived in the city by the bay nearly 30 years ago, and he hasn't looked back. Hirigoyen gave the world a peek behind the curtain in his third cookbook, Pintxos: Small Plates in the Basque Tradition (Ten Speed Press, $24.95), which explores one style of eating from the region. We recently chatted with the congenial chef about the state of Basque cooking in his adopted homeland.

RH: What inspired you to devote a whole book to pintxos?

Hirigoyen: It's long been my favorite way of going out and having lunch or dinner as a family. But at Bocadillos, I saw new energy in small plates. We created some nice dishes for the restaurant that showcased the roots of pintxos.

RH: Traditionally, pintxos are prepared and already out for guests; at Bocadillos, guests order from a printed menu. Why the variation?

Hirigoyen: I know a lot of people expect to see all the pintxos. If you went to Barcelona, because of the volume, a restaurant might go through dishes really fast. But as a chef, I like to have everything fresh and ready made; it's awful to have things sitting there.

RH: Do you ever envision a time when Basque cooking will enter the U.S. mainstream?

Hirigoyen: More and more you see menus that are Basque-inspired. Basque food was really strong in California for many years, because a lot of chefs emigrated here and started opening family Basque restaurants. But the people who owned them weren't necessarily chefs. It was kind of sad to see them disappear. I decided to keep the flame alive. What I love about Americans is they're always intrigued. They're not afraid to come and try something. And this food is very approachable.

RH: Besides your restaurants, you do some consulting with Williams-Sonoma. What's that work like?

Hirigoyen: We run the cafeteria, so we feed about 700 employees; we start at 7 a.m. and finish around 3 p.m. every day. It's very different from the two restaurants; the people all have different needs and they come there every day, so we need to keep it fresh and exciting. It's kind of fun to be associated with Williams-Sonoma.

RH: In the past you and your wife have made it a point to be physically present in your restaurants. Is that still possible?

Hirigoyen: I'm there all the time. I go to Bocadillos two or three times a day, although I might not be there during service. Because of the price point, it's not what people are expecting. There, they can have a great deal and good food. Piperade has a little more refined environment and service, and that's where I hang out. It's like having a party every night. We have a lot of regulars, which is important. They know they're getting good food and something different, and I'm part of that package. People sometimes get upset if they haven't seen my wife in a while. She comes in to work in the back office every day and sometimes out front at night, but not every night — we have a family, and we want to be successful at work and at home.

RH: When did you decide cooking would be your life? Did you have an “ah-ha” moment?

Hirigoyen: Both my parents were passionate about food. When I was young I told them I want to be a chef. And they said: Do you know what you're getting into? You won't have any vacations. You'll work a lot of hours. And they were right. I look at my 12-year-old son and realize I was working at his age. I started washing pots, then worked in pastry shops as an apprentice.

Hirigoyen: I was at a crossroads and not entirely satisfied. I used to live right above a Basque restaurant In Paris and became really good friends with the owner. One night we were drinking and talking and I asked him what I should do. He said, “You're young, maybe you should travel. Why don't you go to the U.S.? A lot of Basque people are there, and I can help you get there if you want. What do you have to lose?” So I moved from Paris and landed outside of San Francisco. The longer I stayed, the more I loved it.

RH: As a restaurant owner, what do you like most about being in the Bay Area? Is there anything you don't like?

Hirigoyen: It's kind of nice to have arrived here in the 1980s, with people like Alice Waters and the movement toward eating fresh. I think we were some of the first to jump into that trend, although some of us didn't understand what the big deal was because we grew up that way. Today, there's attention to nutrition, and it's still a very vibrant community, still pushing the envelope. But sometimes there is a little too much political correctness.

RH: What, if anything, have you done in your restaurants to adapt to the current economic climate?

Hirigoyen: Our restaurants have held up, although traffic from people who may not know them has dropped maybe 10 percent. We chose to keep the quality intact. But, for instance, we had a huge amount of wine stored, and we wanted to make sure we didn't have money sitting there for nothing. So we reduced the inventory a little. You have to look at the long run and what you want to do, knowing that you'll be around for a long time.

RH: Is there a kitchen tool or ingredient that you consider indispensable?

Hirigoyen: I think lemons are always important to have, and I always have Espelette pepper. And a chef's knife. You can go a long way with that.

RH: When you're not slaving over a hot stove, what do you like to do?

Hirigoyen: I'm an avid cyclist. We live in Marin County, which is probably one of the best places for cycling. That's what I try to do on weekends, sometimes up to 50 miles. I'm all outfitted with Basque gear; if you're a Basque man, you don't ride any other bike but an Orbea.

Hirigoyen: Massages. If I could afford it and had the time, I would have one every day. It's great if you can find someone who is really good at it.