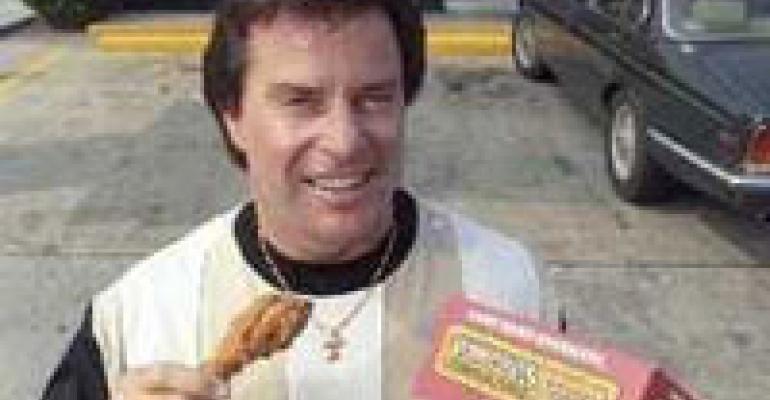 Al Copeland: A Colorful Character Who Lit Up The Industry

He made his money in quick service—“So fast you get your chicken before you get your change” was his first motto—and later switched gears to build a multi-concept full-service restaurant chain. But no matter what Popeyes Chicken founder Al Copeland did, he knew how to make a big impact. His death at age 64 last week reminds us of how far raw entrepreneurial energy can take anyone in the restaurant business.

There are free food samples galore given away each year at the National Restaurant Show in Chicago, but no one has ever done it on the scale Al Copeland did back in the early 1990s. He’d set up the equivalent of a freestanding Popeyes (“no apostrophe in the name; I can’t afford one”) in the southwest corner of the old McCormick Place and start serving all comers for free. It was easy to find: A thick blue haze hung over the Popeye’s booth, endless lines of hungry showgoers stood in front of it from start to finish and, thanks to an overwhelmed ventilation system, you couldn’t miss the smell. The NRA show had hundreds of booths and vendors competing for attention, but everyone walked away talking about Popeyes.

The colorful Copeland cut such a wide swath that even the New York Times felt obliged to run a major obituary when he died near Munich last week at age 64. He had been in Germany for experimental treatment of a malignant tumor in his salivary gland that was diagnosed in November. This form of cancer is rare, found in but three people out of 100,000 annually. Two-thirds of them live for five years or more; Copeland was not one of the fortunate ones.

But he had a tremendous run of luck for most of his life. After one false start in the chicken business, Copeland opened the original Popeyes Famous Fried Chicken in New Orleans in 1971. He gave the standard fried chicken offerings a Cajun flair and flavor profile and the business was profitable by its third week of operation. Franchising began in 1976 and there were more than 800 stores by 1989. Things were sailing along so smoothly during this period that he branched out by opening the full-service Copeland’s of New Orleans, which eventually expanded throughout the South, as far north and east as Maryland, and as Far West as Texas and Oklahoma. Other ventures included Copeland’s Cheesecake Bistro, martini bar concept Sweet Fire & Ice and a line of specialty foods and spices.

Popeyes was the third-largest QSR chicken chain in 1989 when the ever-daring Copeland went out on a financial limb to buy a bigger competitor: Church’s Chicken, then the second-largest QSR chicken chain. Their supply lines were merged, but the two chains were marketed separately. At that point, Copeland and his privately held company controlled more than 2,000 locations.

Overexpansion and overleveraging caused Copeland to declare Chapter 11 bankruptcy in 1991. He lost Church’s and Popeyes but, tellingly, cut a deal during the bankruptcy resolution to exclusively manufacture and sell seasonings and other proprietary items to all Popeyes through 2025.

This turned out to be a tremendously lucrative concession by the new owners, and the proceeds allowed Copeland to focus on the full-service side of his restaurant empire. Copeland’s, his Cajun-themed casual dining restaurant, numbered 40 units at one point; 21 operate today. There are six Copeland’s Cheesecake Bistro units, which feature signature desserts. Both operations have lengthy, Cajun-tinged menus that offer dozens more options than casual restaurants typically do.

Not all of Copeland’s restaurant ideas flourished. Straya California Creole Café never caught on, nor did quick-serve seafood spot Wholley Mackerel or gyro concept Wrap-n-Roll. No matter. Al Copeland Investments, the umbrella company over all of Copeland’s ventures, still had plenty of irons in the fire, and enough cash to keep them hot. Other ventures included the ownership of three hotels, an interest in the Improv chain of comedy clubs and a churrascaria restaurant concept, Amor de Brazil, now operating in Overland Park, KS and Mason, OH, near Cincinnati. Former Palm Restaurant head Fred Thimm became c.e.o. of Copeland’s restaurant division last summer, charged with taking Copeland’s New Orleans truly national via the franchising route.

Copeland made headlines away from the restaurant business, too. He was a world-class speedboat racer—he favored 50-foot-long boats—and an owner and displayer of expensive cars. He knocked heads, literally, with a rival for a Louisiana gambling license in a dining room brawl at the Morton’s The Steakhouse in New Orleans. After it, both Copeland and his third wife, then six months pregnant, were hospitalized. The rival, Robert Guidry, was later ordered to pay $3.5 million in fines and restitution for illegal actions he took that helped him beat Copeland out of the lucrative riverboat-casino license.

Copeland also tangled verbally with revered New Orleans writer Anne Rice, who took umbrage when he opened a restaurant in a building located at 2001 St. Charles Avenue which she said had connections to her fictional character the Vampire Lestat. Dueling full-page newspaper ads appeared, and Copeland filed a lawsuit claiming Rice had defamed him. The suit was dismissed, and Rice soon left town. The disputed site is home to a Copeland’s Cheesecake Bistro now.

His four marriages and four divorces were the stuff of legend in New Orleans. Marriage ceremony number three, to Luan Hunter, featured custom fireworks that spelled out “Al, I’ll Love You Forever, Luan” while the Popeyes corporate helicopter hovered overhead to sprinkle the newlyweds and their guests with rose petals. Divorce papers filed after the demise of Copeland’s fourth marriage in 2004 revealed that his net worth was $319 million and his annual income was $13 million.

“His flamboyant lifestyle never lost speed, and stood out even in a city of eccentrics like New Orleans,” said the New York Times. The City of New Orleans acknowledged Copeland’s passing with the following statement: “New Orleans has lost a true son,” wrote mayor Ray Nagin. “Al Copeland was a visionary and daring businessman and a courageous competitor. Yet, he will be remembered for his generosity, his fierce commitment to the city of his birth and the passion and energy that surrounded him.”