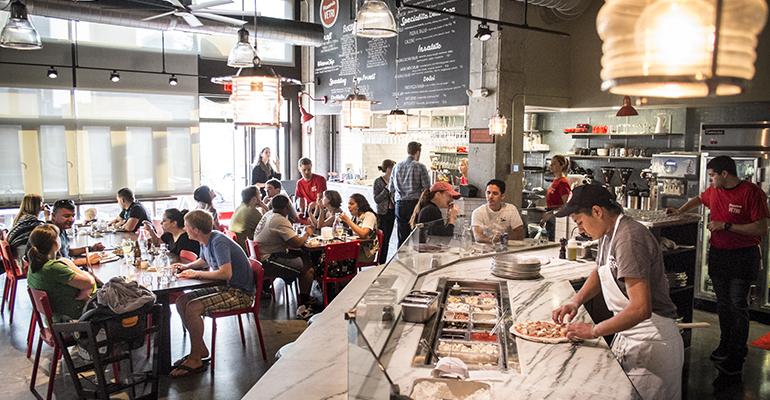 Chef Marc Vetri was looking for growth with infrastructure. And the James Beard Award winning chef believes he has found it with retailer Urban Outfitters Inc.

Vetri is partner in the Philadelphia-based Vetri Family group of restaurants, which on Monday announced an agreement to sell all but one of the company’s six concepts to retailer Urban Outfitters.

Details of the transaction were not disclosed, but the deal includes the soon-to-be three-unit Pizzeria Vetri, along with casual dining concepts Amis Trattoria and Osteria, along with the Italian gastropub Alla Spina, and rotisserie concept Lo Spiedo.

For Vetri, the opportunity was a solution to what is a common challenge for growing multi-concept operators, he said.

“Infrastructure is what we all search for,” Vetri said. “Chefs are very creative in certain areas of our world, but where we’re lacking and looking for help is the innards, the infrastructure. We’re all out there struggling to figure out what companies like Urban Outfitters already know. So why not use our core competency and theirs and put them together?”

“The big attraction of this concept is the enormous depth of its appeal,” Hayne said of Pizzeria Vetri. “From the very young to the very old, everyone loves great pizza.”

Urban Outfitters’ plan is to multiply the casual dining concept, both as a standalone restaurant and as an amenity at its retail stores in an ongoing effort to create a more  “experiential shopping experience.”

As more shoppers migrate to online buying, brick-and-mortar retailers are increasingly adding dining as a component to draw in foot traffic.

In Austin, for example, the third Pizzeria Vetri is scheduled to open Nov. 21 in a retail complex Urban Outfitters calls Space 24 Twenty, near the University of Texas.

Chef Michael Symon is also scheduled to open his burger concept there, and the restaurants will be clustered around an open courtyard that offers restaurant seating and a stage for special events and concerts.

“We believe the project has a high probability for success,” Haynes said.

After Austin, two more Pizzeria Vetris are scheduled to open in Washington DC within the next 12 months, said Haynes.

In early 2017, another is scheduled to debut in Devon, PA, outside Philadelphia, where Urban Outfitters is planning to open an Anthropologie store, along with its Terrain outdoor garden center, and another Vetri Family concept, yet to be determined, though Vetri said the Amis concept is likely.

It’s too early to say which of the other Vetri Family concepts will grow. “We’re still figuring that out,” he said.

Both Vetri and business partner Jeff Benjamin will join Urban Outfitters to help run the company’s growing food-and-beverage division, including several concepts the company has developed internally to put into stores.

“We’ll be running those under the auspices of the Vetri Family,” said Vetri. “For us, it’s business as usual with just a really great partner that is really awesome at things we’re not awesome at.”

“Urban Outfitters’ core competency is looking for real estate, building things and scaling things, and it offers just amazing shared services for all their brands, and infrastructure,” he pointed out. “If you bring those two things together, you can make great things happen.”

The acquisition does not include Vetri Family’s first restaurant and the flagship, Vetri Ristorante, which Vetri described as “not scalable."

“It’s a research center. It’s an innovation center,” he explained. “We do a lot of things there, but it’s not one we’ll do another one of.”

Vetri, who was named Best Chef for the Mid-Atlantic by the James Beard Foundation in 2005, and was a finalist for Outstanding Chef, Philadelphia in the 2015 awards season, said the deal will not limit him as a chef.