Sanford “Sandy” D’Amato’s life has unfolded along the path of food and cooking. He graduated from the Culinary Institute of America in 1974, and in 1989 opened his restaurant Sanford in the former location of his family’s Milwaukee grocery store. He was one of a dozen chefs selected to cook for Julia Child on her 80th birthday in 1992, won a James Beard Award for Best Chef-Midwest in 1996 and cooked for the 2002 Salt Lake City Olympics and the Dalai Lama.

In his memoir, Good Stock, D’Amato writes, “My food is an unfolding journey, and for me, a recipe is a roadmap on that journey.” Accordingly, he has included 80 recipes that arose out of his life experiences. The stories and recipes included in Good Stock follow the interwoven threads of D’Amato’s career, personal life, love of food and learning from mentors and experiences alike. “Without me living those stories, there wouldn’t be any recipes,” he says. 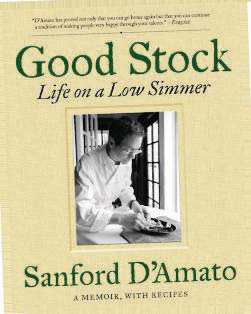 Recipes range from the Fermented Black Bean Clams with Spicy Salami and Ginger appetizer to Maple-Glazed Duck with Burnt Orange Vinaigrette, and Ginger Snap Cannoli with Wisconsin Dried Cherry Mascarpone Cream. “Each recipe embodies my basic philosophy in cooking,” D’Amato says. “Whether preparing a grilled hot dog or a pan-roasted monkfish with paella rice, a true craftsman treats all dishes with equal love, soul and respect.”

After 23 years of operating Sanford, D’Amato and his wife Angie have sold the restaurant to their chef de cuisine Justin Aprahamian. They now divide their time between Milwaukee and Hatfield, MA, where they plan to open a cooking school named Good Stock.