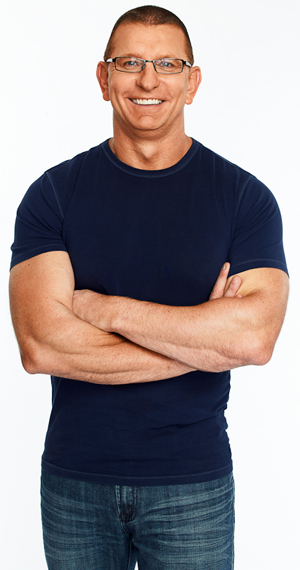 Robert Irvine is one of the Food Network’s most enduring talents. He started in 2005 hosting Dinner: Impossible, in which he overcame challenging circumstances for turning out a meal. He hosted that show for seven of its eight seasons, and followed up with Restaurant: Impossible, in which his challenge was to “save America’s most desperate restaurants from impending failure in just two days with only $10,000,” now in its seventh season.

His most recent project, Restaurant Express, is a high-stakes musical chairs in which he takes a bus trip across the country with Nine contestants who all dream of some day owning a restaurant. Each week,  one gets booted off the bus, and the winner earns a spot as executive chef at a Las Vegas resort.

The kinds of missteps they make reflect what goes on in real-world settings, Irvine says, and result from a lack of understanding about what it takes to run a profitable restaurant. He thinks the failure rate is so high because many owners are drawn to open restaurants for the wrong reasons. After years of advising struggling operators, he has identified two primary groups that fit that definition.

“A lot of people get into the business and think it’s going to be a cash cow,” Irvine observes. “They don’t put enough money into it, and they don’t have a realistic business plan."

The second character type? The talented home cook who thinks he or she can parlay that into a money-making venture. Too often, he says, “they’ve never run a business, let alone a restaurant, and they’ve never managed people. They are undercapitalized, and when the money comes in, they don’t save it, they spend it. They need to put some of it away for a rainy day fund, for redecorating, to replace equipment.”

“There aren’t many places you can learn these things,” Irvine admits. “You can learn some things in school and from books, but how can you teach some of these lessons without putting someone in a restaurant and letting them fall down?”

One area in which Irvine is a stickler is cleanliness, especially when it comes to key equipment such as ice machines.

“A dirty ice machine is like driving a car with no brakes,” he says. “If you don’t have the time or the manpower to clean it properly, it will grow salmonella, bacteria and mold. I have been to restaurants where the ice machine hasn’t been cleaned since the restaurant opened. The mold and bacteria are so bad that the ice they produce is just awful.”

He’d rather see an owner lease this kind of equipment and leave the cleaning and maintenance to the company that owns it.

The muscular Irvine is also a stickler about staying fit. Exercise and healthy eating are ingrained in him, he says, and he believes that because of those habits “we do better work and are better people.” How does he fit fitness into his busy taping and travel schedule? “You don’t have to be a gym rat to be fit; you can exercise in your home or playing with your kids,” he says.

“In business, make sure that you trust nobody. It’s your money, so you better know where every penny of that money is going. Technology is so good these days that you can know where everything is from minute to minute,” he says.