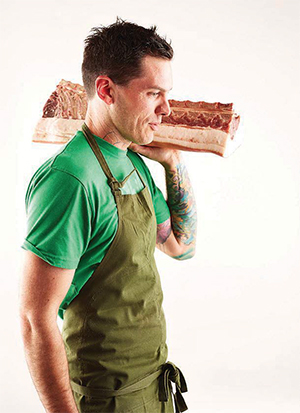 In the era of farm-to-table, why is it so difficult for a vegan to get a decent meal at so many chef-driven restaurants? That’s what a colleague asked me in a cab on our way to FT33 in Dallas. And then she ordered Chef Matt McCallister’s $28 vegetable composition. Angels sang as a server presented a rustic slab of polished wood bearing a dozen or so beautifully prepared, composed and dressed vegetables. We stared for minutes at this work of art before a fork was picked up. Despite the serious slab of meat you see the chef toting here, the 33-year-old has a deep respect for veggies, which he showcases in the aforementioned composition and in a nine-course tasting menu consisting mostly of vegetable-focused creations. McCallister’s artistic presentations come from a love of art that was formed while attending the Metropolitan Arts Institute in Phoenix years ago. Cooking, he says, allows him to combine his fascination with both food and art. Like the slab of wood, McCallister does not simply present his creations on de rigueur white plates. Many of his offerings, which include carnivorous delights such as heritage pork short rib, arrive on stunning plateware crafted by local artists. An artist in his own right, McAllister sidestepped culinary school but trained under Chef Stephan Pyles. He opened FT33 in late 2012 and the media attention has not let up. Bon Appetit named FT33 a Top 50 New Restaurant, while Food & Wine named him a Best New Chef earlier this year. He’s also achieved semifinalist status for a James Beard Award as Best Chef in the Southwest. Most importantly, at least with my dinner companion, McCallister won the heart of a vegan skeptic.