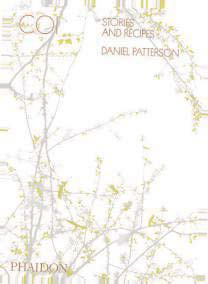 From the forewords by food writers Harold McGee and Peter Meehan to the 68 narrative recipes and personal essays, Daniel Patterson’s book offers insight into his food and philosophy of new California cuisine. The chef/owner of Coi in San Francisco has five James Beard nominations to his credit, and five California restaurants: Coi and Alta in San Francisco, plus Plum, Haven and Plum Bar in Oakland. In addition to holding two Michelin stars, Coi is on the San Pellegrino World’s Best Restaurants list.

In Coi, Massachusetts native Patterson provides a richly appetizing narrative.  Essays and photography express the art and poetry of his food. As he says in the book’s introduction, it’s not a cookbook—it’s the story of Coi, written through the food, with a little bit of his own story as well.  Images of ingredients, menu items, farms, flowers and cityscapes put recipes from Coi into context.

Patterson shares the inspiration for ideas such as Carrots Roasted in Coffee Beans with crème fraiche, oats and cilantro. “Ideas are never the end of the story,” he writes, “but the beginning. We take promising lines of inquiry and follow them to their conclusion, often over a period of years... The first idea is intuition and luck. The subsequent ones are hard work.”  Other recipe inspirations include Chilled Spice Ratatouille Soup, and an Inverted Fromage Blanc Tart with fennel and wheatgrass. Patterson says of the evolution of this recipe, “…the form morphed into a dish with many antecedents but few reference points.”