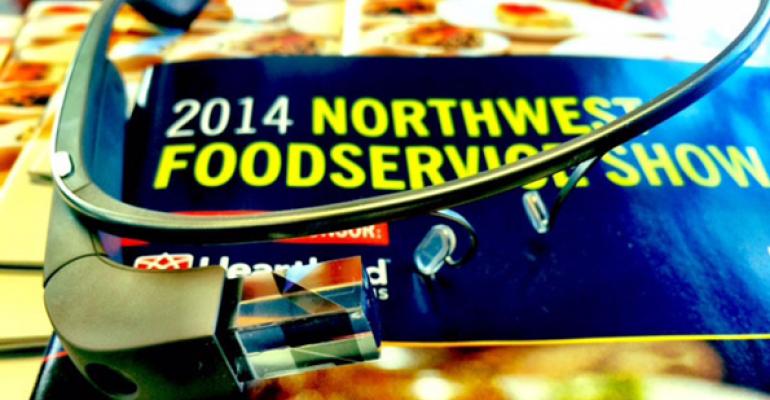 Restaurant operators have been able to go online to “attend” virtual foodservice trade shows for a number of years. But visitors to this weekend’s 2014 Northwest Foodservice Show in Seattle can explore the outer limits of trade show attendee technology by tapping into the Google Glass live streaming option the event will provide.

By now, most people know about Google Glass. It’s defined as “a wearable, voice-controlled Android device that resembles a pair of eyeglasses and displays information directly in the user's field of vision.” Few people actually own Google Glass right now, because Google has kept tight control of supply via its insiders-only “Explorers” program. But anyone can buy the device on Tuesday, April 15. It’s a one-day sale, and the price is $1,500 plus tax. Go here to make your purchase.

Alas, this sale comes just a couple of days too late for anyone who wants to use Google Glass at the Northwest Foodservice Show, which takes place on April 13-14. But the live streaming idea is still worth a look. The general idea is to make time spent on the show floor more productive for showgoers, while providing exhibitors with a new way to draw additional traffic to their booths. Event sponsor Washington State Restaurant Association (WRA) says it is the first foodservice organization to use Google Glass technology via a live stream of its trade show.

The organization says its Google Glass trade show experience will utilize the newly launched LiveStream Platform specific to Glass, and will provide attendees with a unique firsthand perspective, even as they experience the physical show for themselves.

What’s the content like? “Several industry experts, exhibitors and attendees will be interviewed live using Google Glass,” WRA explains. “Viewers will experience walking through the show through the eyes of industry insiders throughout the event. Viewers will be able to see, in real time, various products, services and events over the course of the two-day show.”

Exhibitors hope this technology lead to more in-person booth visits from operators. “Instead of waiting for people to come to us,” says WRA director of communication and technology Lex Nepomuceno, “we will go out to them. This endeavor will generate curiosity among those attending the event, while providing another layer of outreach for participants typically tethered to a booth.”

So is this the future of foodservice trade shows? Take a look and decide for yourself during the show.

“WRA's Google Glass live streaming will also supplement a continuous live feed via Google Hangouts On Air and the WRA RetroCam,” WRA says. “The live feeds can be accessed by the public at wraretro.com and the WRA and NWFSS Facebook pages.”

Note to Google Glass owners who travel to Seattle to attend the Northwest Foodservice Show. Whatever you do, don’t go to the Lost Lake Cafe. That’s the restaurant whose owner, David Meinert, banned Google Glass wearers from his operation, making national headlines in the process. Here’s the policy now:

“If you do wear your Google Glasses inside, or film or photograph people without their permission, you will be asked to stop, or leave. And if we ask you to leave, for God’s sake, don’t start yelling about your ‘rights.’ Just shut up and get out before you make things worse.”