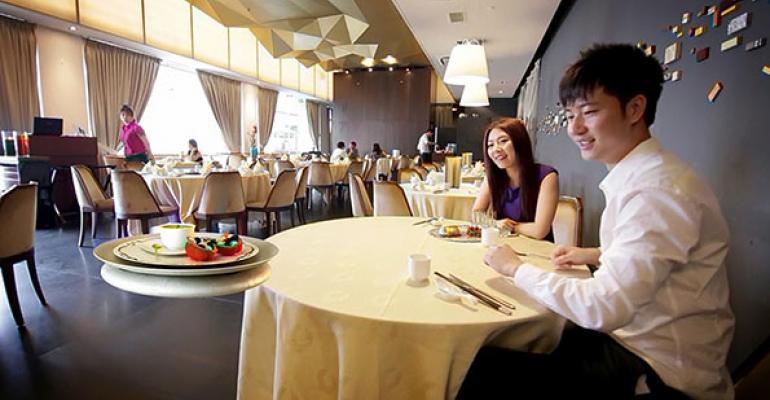 Forget the economic and operational benefits Infinium Robotics claims full-service operators will enjoy when commercial deployment of its autonomous flying robot servers begins next year. The “wow” factor alone should be enough to fill any dining room where, literally, flying saucers deliver each customer’s order directly to the table.

The device, dubbed Infinium-Serve, is still under development. But a company video shows that it’s almost ready to go. Singapore-based hospitality firm Timbre Group is scheduled to have a fleet of these robot waiters in use at one of its concepts by late next year. A version of the machine is configured to work in bars, too.

The Infinium-Serve is not meant to replace human servers. Its lone practical function is to deliver food or drink to a table. Every other server function will still be performed by traditional waitstaff, but the manufacturer suggests that fewer servers will be needed once the robots are deployed.

In the drone (i.e., unmanned aerial vehicle) era, Infinium-Serve’s hardware isn’t necessarily all that cutting edge. The big breakthrough is a proprietary collision avoidance technology that enables fully autonomous delivery by multiple devices along preprogrammed routes. Another key: Infinium Robotics says its product is readily configurable to any restaurant layout. A simple plug-and-play installation will be all it takes to get going.

As a method of generating publicity for a restaurant or creating massive buzz on social media channels, the Infinium-Serve seems like a can’t-miss proposition. The device turns a routine meal occasion into a trip to Tomorrowland. “This will result in an enhanced dining experience which will eventually lead to increased sales and revenue for the restaurants,” Infinium Robotics c.e.o Woon Junyang tells Channel NewsAsia.

Singapore-based Infinium develops unmanned aerial vehicles applications for industries that require a high level of precision. Most of its work is done outdoors. For restaurants, its “intelligent and adaptive algorithm developed in-house with smart trajectory planning enables precise flight path and positioning precision of up to 1 cm accuracy in an indoor environment.”

Let’s hope whoever is operating the mistletoe drones now hovering over unsuspecting dining room patrons at TGI Fridays units in the United Kingdom reached a similar level of accuracy. Outfitted with a HD “Kiss Cam” that records the action, the drones are part of Fridays' “Togethermas” U.K.-only Christmas marketing campaign.

The potential for some dining occasions to become awkward, perhaps even creepy, seems high with this marketing tactic. But Fridays thinks the net result will be a boost in holiday cheer.

"We wanted to see how we could make Christmas get-togethers in our restaurants even more entertaining, and offer guests the encouragement they need to make their move," TGI Fridays spokeswoman Rachel Waller told the Manchester Evening News.

“Mistletoe drones are the perfect way to do this. Not only are they great fun for the entire restaurant, but they help people get a little closer at this time of the year," Waller adds. "Who knows—maybe we'll have had our first mistletoe drone wedding by this time next year."

In the meantime, some guests may wish to be careful where they sit when dining at a TGI Fridays in the U.K.