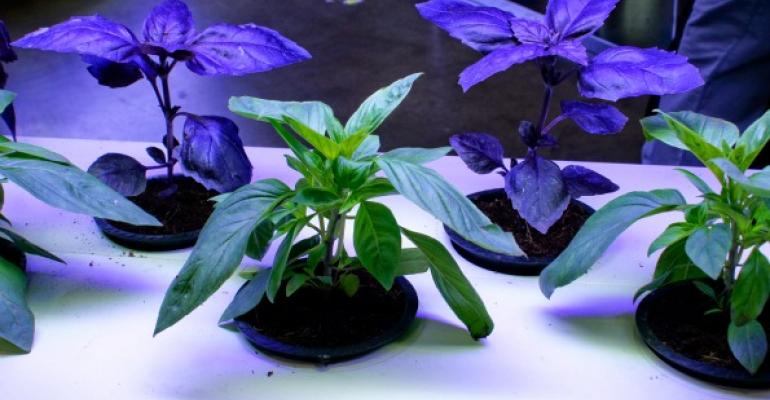 <p> A hydroponic garden was among exhibits at the recent NRA Show devoted to sustainability.</p>

Rick Bayless started thinking about sustainability in 1987 when he moved from Mexico to Chicago, before, he says, the term was even being used. He wanted to find local ingredients and bring those flavors to his new restaurants, Frontera Grill and Topolobampo.

But back then, Bayless recalls, there were no farmers’ markets in Chicago and the city’s top chefs took pride in ingredients “from far-flung places” and the “very rarified experience” their restaurants offered. It was the polar opposite of what he’d known in Mexico, where everything was localized.

Today’s challenge is far different than what Bayless faced 26 years ago. Sustainability is such a big and broad term now, said Charlie Arnot, c.e.o. of the Center for Food Integrity, that it can “lack meaning” and has become “diluted.” Its definition can include local sourcing, the reduction of natural resources, care of animals, treatment of employees and overall environmental responsibility.

His best advice for operators looking to embrace it? “Be mindful at the beginning of what you want your sustainability program to be when it’s done,” Arnot said. “Don’t just jump into a program or issue. What does it mean to you? What is the objective?”

Tim Fitzgerald, a senior policy specialist with the Oceans Program of the Environmental Defense Fund, stressed that any program should first start with research. “Start with an open mind because there’s a lot of information out there, and the different sources may not all agree with each other,” he said.

Seafood sustainability, Fitzgerald’s focus with the EDF, was ninth on the NRA’s top trends list before the year started, but he predicted the issue will rank near the top next year. Ninety percent of the seafood market in the U.S. is imported, and a third of all seafood is mislabeled, he said.

“Fraud and mislabeling is something every single seafood business needs to have a plan for, whether they want to or not,” Fitzgerald said. “Voluntary adopters can get some additional value now and take advantage as early adopters for something that will become mandatory.”

He recommended asking your supplier where the fish is from, if it’s wild caught or farm raised, whether there are any eco-friendly alternatives and if the authenticity can be verified. He said U.S. fisheries are doing a much better job today and supporting them allows operators to tell a local story.

Bayless said that because issue with seafood can be so overwhelming he chose to follow the Seafood Watch program from the Monterey Bay Aquarium, which recommends which products are good, acceptable or should be avoided.

Bayless views his role as a restaurateur as a “community catalyst,” and the way he built a network of local farmers shows why it’s an apt description. He recalled a farmer who provided “the most amazing spinach in February” with a uniquely local flavor, but he couldn’t grow as much as Bayless needed.

So Bayless invested in a second hoop house for the farmer. He was repaid in spinach the following year. Thus began a series of small no-interest loans to farmers that could be paid back in product, and ultimately led to the formation of his Frontera Farmer Foundation. The nonprofit provides capital development grants to Chicago-area farms, some $1.2 million in the decade since it was created.

“When a restaurateur grabs hold and tells the story of where food is coming from and the supplier is from the local community, that is sustainability on the ground level,” said Bayless, whose restaurants have earned a variety of green certifications and awards.

“The bottom line is it does come to down to dollars and cents, and we can’t go out of business,” Bayless said about the higher costs that come with sustainability. “But you’re adding value when you can add to that story. If you can cast this as something different, there’s no price comparison. How can you redefine what you’re doing?”