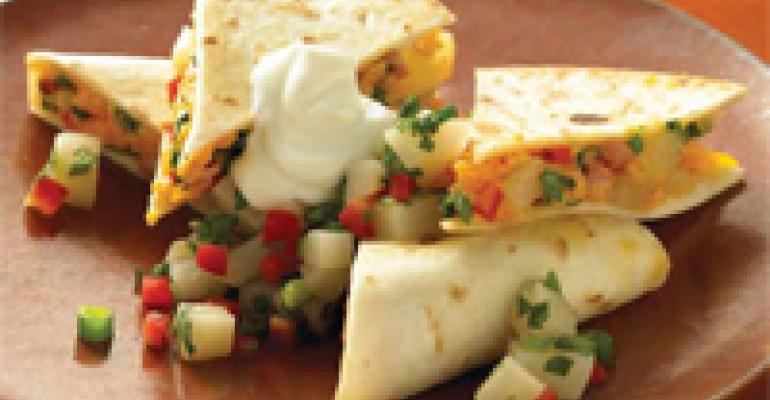 In a bowl, combine diced pear, red pepper, ham, scallion, cilantro and chipotles. Mix well; cover and refrigerate until ready to use.

To assemble each quesadilla: Lay out a flour tortilla on clean, dry surface. Top one half of each tortilla with approximately 1 cup of pear mixture. Top each tortilla with ½ cup shredded cheese. Fold in half. Place on sheetpan, cover tightly with plastic wrap and keep refrigerated until ready to prepare and serve. May be assembled up to 2 hours in advance.

To prepare quesadillas: Heat 2 Tbsp. oil in large skillet or griddle over medium heat; heat each quesadilla until slightly golden and flip to brown the other side. When cheese is melted and quesadilla is heated through, remove from heat and serve on plate, cut into 4 wedges. Top with a ¼ cup dollop of sour cream, a splash of pepper sauce and ¼ cup pear salsa.

For pear salsa: In bowl, combine all ingredients. Mix well. Place in covered container and refrigerate at least 2 hours before serving as directed.