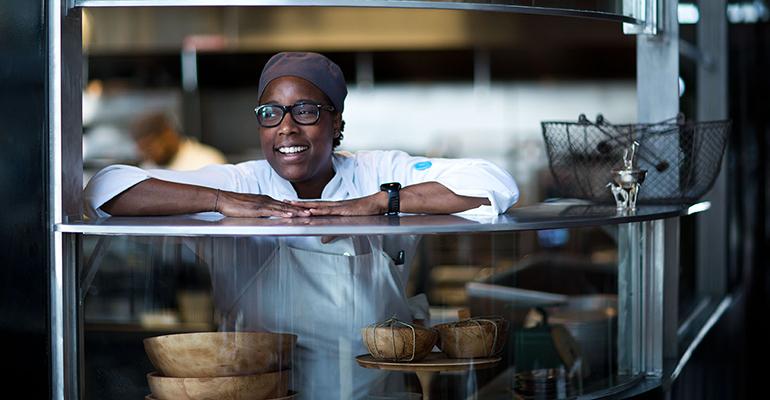 On the Rise: Mashama Bailey

The outsider with an inside view

Curiosity may have killed the cat, but it’s given New York Chef Mashama Bailey a new life — and huge success — at The Grey in Savannah, Ga.

“What’s resonating with people is my curiosity of this environment and really trying to highlight this food in a different way,” said Bailey, who was born in The Bronx, raised in Queens but has Georgia roots.

Rather than imposing her New York City culinary sensibilities on the menu, Bailey is “trying to understand, trying to cultivate the flavors I see and smell around here.” New York-born Mashama Bailey is elevating cuisine in Savannah, Ga., by tapping into local traditions and ingredients, including pickled oysters and chicken curry.

For example, in these parts, locals used to pickle oysters as a way of preserving the fruits of the sea. Bailey has brought this Southern staple back to life, preparing her version with a brine of vinegar, sugar and all-spice, mace and fennel and serving it with pork fat on a saltine and chicken skins for crunch.

Similarly, the Chicken Country Captain is Bailey’s version of a local Savannah curry stew. She deconstructs the dish, creating a curry sauce that is poured over the chicken and garnished with almonds, currants and fried onions.

Part of understanding the food in the region is about building relationships with local suppliers, something Bailey said was a challenge at first.

“Coming down here it’s really difficult because you don’t have a network here,” she said. “Down here you have to be introduced to people. That’s a thing here.” The Grey is a beautifully restored art deco bus station.

But Bailey found her way. The New York Times in 2015 called The Grey one of the most talked-about new restaurants in the country. In 2017, it was named Eater’s Restaurant of the Year.

Further down the line, Bailey envisions staying local, perhaps opening a little bakery or an ice cream shop, or maybe a small restaurant with a tasting menu.

But, for now, Bailey is staying focused.

“I’m just thinking about how to be better at what I’m doing,” she said. “Better motivate people … letting people take more responsibility. It’s been so much better for the food.”