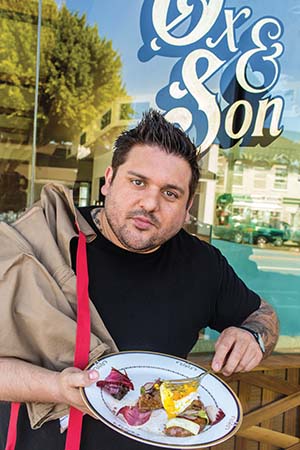 Brad Miller's Santa Monica restaurant, Ox & Son, pays homage to his father, Gary “Ox” Miller, a butcher from the Chicago suburbs. From the age of 15, Miller worked in his father’s butcher shop learning a craft that would later serve him well.

The recently opened Ox & Sons is where Miller was meant to be. It stands in stark contrast to his previously gig in Topanga, CA, at the Seventh Ray, which purports to offer food “charged with the vibration of the violet flame of the Seventh Ray.” Huh? Despite the hippie-dippie esthetic, the L.A. Times praised Miller’s cooking there and called him a “serious chef” doing “serious food.” He developed his kitchen chops while working at several multistarred restaurants, including Patina in L.A.

Miller’s Ox & Son is an elbows-on-the table neighborhood restaurant known for its rustic dishes and bold bites. As you might guess, Miller is a self-proclaimed “meat man.” His elevated comfort food dishes include chicken-fried duck confit, sticky pig cheeks and Benton’s ham and corn griddle cake with maple butter. There is no pretense here, just some damn good eating.

Miller also oversees the menu at another recently opened restaurant, Ashland Hill, a Santa Monica burger and beer joint. Both restaurants operate under the banner of FNA (Fork n’ Awesome) Hospitality Group, of which Miller is the executive chef and partner with Mark Verge and Mark Mittleman. With two new restaurants under his belt and others on the drawing table, this son of a butcher man is carving out a future with unlimited possibilities.