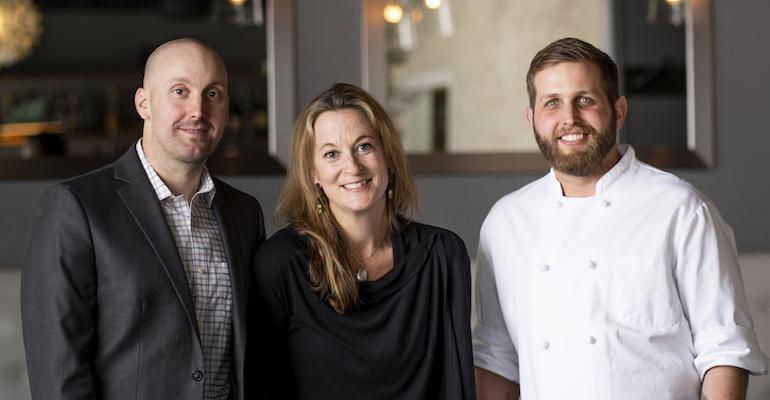 Restaurants are famous for getting by on razor-thin margins, but there’s nothing like a global pandemic to expose what many now see as a fundamentally unsustainable business model.

So says Austin Carson, co-owner of the 45-seat Restaurant Olivia in Denver, which is scheduled to reopen for dine-in service this week, albeit at limited capacity.

What was a neighborhood Italian restaurant with a traditional a la carte menu before the pandemic forced a dining room shutdown is re-emerging as something completely different.

After offering only takeout service for three months, the post-shutdown Restaurant Olivia will offer a prix fixe four- or six-course tasting menu, with dynamic pricing that will vary by day and time. Guests will be asked to commit to their reservation by pre-paying through Tock.

Related: Nick Kokonas of The Alinea Group and Tock on quickly overhauling your company’s business model

After offering only takeout service for three months, the post-shutdown Restaurant Olivia will offer a prix fixe four- or six-course tasting menu, with dynamic pricing that will vary by day and time.

Hospitality will be included, so tipping will be eliminated, and Carson plans to balance out wages between back- and front-of-the-house workers to make it more equitable — though at press time he said that was still a work in progress.

“This is something we’ve been talking about for a long time,” said Carson, who with his partners took over the restaurant last year and converted it to Restaurant Olivia in January. Before the shutdown, the restaurant charged a 3% surcharge to help support back-of-the-house workers.

“The wage gap is troubling,” he said. “We live in troubling times. There are a lot of underlying racial issues and misogyny and I don’t think the restaurant industry is immune to that.”

Inspired by operators like Danny Meyer who have pioneered the hospitality-included model, Carson acknowledges that many other restaurants have attempted to shift to no-tipping but have ended up returning to the traditional method of servers working for tips.

But Carson believes the pandemic has changed everything — and that it will also change how restaurant operators think about making money.

“We’ve all got a really good look at this house of cards this whole business actually is,” he said. “Within 24 hours of the governor announcing the shutdown [in Colorado], we had to furlough virtually everyone on our staff. People got a really visceral look at how little margin for error there is.”

Moving to the pre-paid tasting-menu format, Carson’s main concern is sticker shock among guests. “You have to raise your prices,” he said. “People don’t understand that cocktail was $12 and now I have to charge $15 to cover the cost of people doing the job, so that cocktail looks more expensive.”

But Carson believes diners will be more forgiving after watching the restaurant industry take a hit during the pandemic. “Now I’m hoping there’s a little more understanding about what we’re trying to do,” he said.

The pre-payment format is necessary in part because the restaurant will only open for dine-in initially with five tables, so a no-show or day-of cancellation rate of 10%-15% is completely untenable, said Carson.

If nothing else, the pandemic will train guests to commit to a time slot and show up, he said. “And it’s not only ‘thank you for showing up,’ but also ‘you’ve got 90 minutes’ so I can safely make room for the next table,” he said.

The dynamic pricing allows Carson more flexibility to establish “what each seat is worth and to what extent do I monetize each seat.”

Carson said he’s not sure whether Restaurant Olivia will stick with this format permanently. The goal is to lay the groundwork for fundamental change and create a model that will offer a more solid foundation.

And that’s something he believes the entire industry will be forced to do as they look for recovery from this crisis.

“Everything financially has to be reexamined and picked apart and rebuilt,” he said.