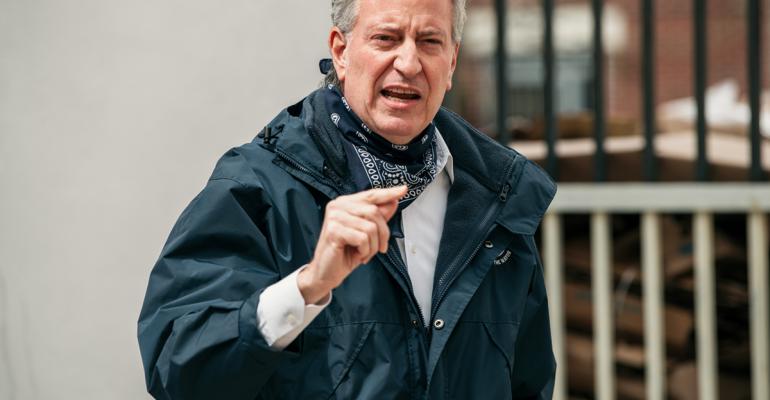 New York City commits $2 million in grants of up to $30,000 each for independent restaurants

The New York City government and private funding are making a total of $3 million in grants available to restaurants that agree to staff up to pre-pandemic levels and to feed people in need, mayor Bill de Blasio said Thursday.

Operators can apply for up to $30,000 in grants for direct wage reimbursements if they retain all of their employees or an equivalent number who became unemployed due to the coronavirus pandemic. The money must be applied to salaries over a minimum of six weeks or as long as 12 weeks.

Related: House Democrats propose next coronavirus relief bill, seeking $3 trillion for states and local governments to provide another round of stimulus

Preference will be given to restaurants “which commit to ‘high road’ employer practices,” according to a document detailing this Restaurant Revitalization Program.

Those include commitment to higher standards than legally required with respect to wages, racial and gender equity and other unspecified “worker-friendly” conditions.

Eligible restaurants must commit to paying all employees the full, non-tipped minimum wage of $15 per hour “after a return to standard restaurant operations.”

New York City restaurants currently are only open for takeout and delivery.

But during the grant period, restaurants must pay employees covered by the program at least $20 per hour. The $20 per hour will be reimbursed by the city, but additional wages, above $20, would be paid by the restaurant as would unemployment insurance, workers’ compensation and other legal obligations.

Then after the grant period, those wages could be dropped back to $15 per hour.

Restaurants applying for the grant should agree to make at least 500 free meals for New Yorkers affected by the pandemic, with a focus on essential workers and low-income residents. Restaurants that commit to a larger number of meals will be given preference., as well restaurants in high-need areas.

Additionally, One Fair Wage, a non-profit organization committed to doing away with the tip credit is providing up to $1 million in $5,000 grants to organizations that adhere to its employment principles, including elimination of the tip credit. That money will be available for restaurants to buy food, safety supplies or “other needs.”

Andrew Rigie, executive director of the trade association NYC Hospitality Alliance, criticized the program as politically motivated and unhelpful. In a press statement, Rigie said "It’s shocking that the Administration is pushing the political agenda of the controversial Restaurant Opportunities Center (ROC) by dangling short-term monetary relief to financially devastated restaurants in exchange for long-term financial disaster, by forcing them to sign on to their misleading wage campaign, which has been rejected by restaurant owners and workers throughout the City and State. It’s pay to play politics with an organization that has a very controversial history in the restaurant industry. Like so many who have stepped up to support local restaurants during this crisis, the Administration has also made very important efforts lately but today’s announcement sets restaurants back.”

ROC was co-founded by Saru Jayaraman, who is also president of One Fair Wage. Both advocate for the elimination of the tip-credit, a stance opposed by many members of the restaurant industry.

The New York State Restaurant Association objected to the structure of the program, calling it a "non-starter" for many restaurants.

In an email, NYSRA president and CEO Melissa Fleischut said, "While we applaud Mayor de Blasio and his administration for recognizing that restaurants across the City are struggling to keep their doors open during this unprecedented crisis, this latest plan will do very little to aid those in need. The strings that come attached to this funding make this an almost impossible option for restaurants and will actively harm the long-term prospects of many. The requirement that restaurants dramatically increase their payroll costs before seeing any of this money rings hollow and, in fact, makes it tougher for those restaurants in the hardest-hit communities to take advantage of this program. This is simply a non-starter for many, and we wish the City approached the business community to help ground this program in reality before moving forward with it."

Restaurants may apply for a grant at this link.