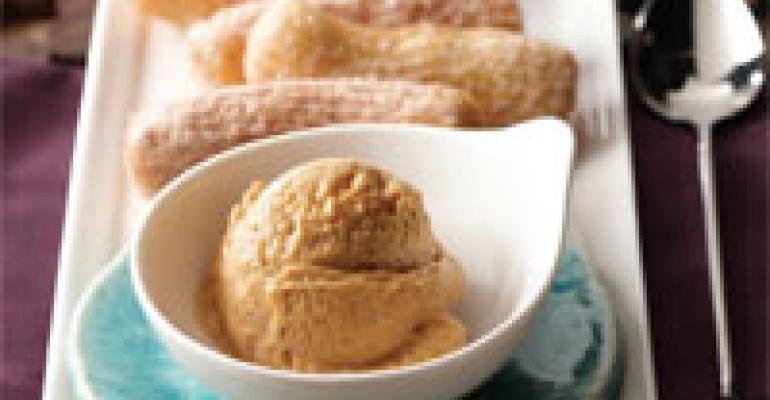 For Soy Pumpkin Custard Ice Cream: Preheat oven to 400°F. In medium bowl, mix sugar, cinnamon, nutmeg and vanilla together. Cut pie pumpkins in half; scoop out all seeds. Sprinkle inside of pumpkins with 3 tsp. sugar mixture and let sit for 1 hour.

Scrape sugar out of pumpkins, add to remaining sugar mixture. Add egg yolks to sugar mixture. Whisk yolks and sugar together until light and fluffy. Place pumpkins on a baking tray. Bake at 400°F for 30-45 minutes, or until soft.

In a large saucepan, add soy creamer. Bring to a simmer, then remove from heat. Slowly whisk sugar mixture into creamer until combined. Return to burner and cook on medium heat until mixture coats back of wooden spoon. Scoop flesh out of roasted pumpkins; add to ice cream base. Blend mixture until smooth and then strain. Allow to cool. Freeze in ice cream machine according to machine instructions.

For Churros: Prepare to fry churros by heating 1-1½" oil in a deep pan to 360°F. In a 3-qt. saucepan, heat water, butter and salt to a rolling boil. Stir in flour. Stir vigorously over low heat until mixture forms a ball, about 1 minute. Remove from heat. Add eggs all at once and beat. Continue beating until smooth.

Spoon mixture into a piping tube with large star tip. Squeeze 4" strips of dough into hot oil. Fry 3 or 4 strips at a time until golden brown, turning once, about 2 minutes on each side. Drain on paper towels. In a medium bowl, add the sugar and cinnamon; mix together. Roll churros in the cinnamon sugar. Serve with Pumpkin Custard Ice Cream.