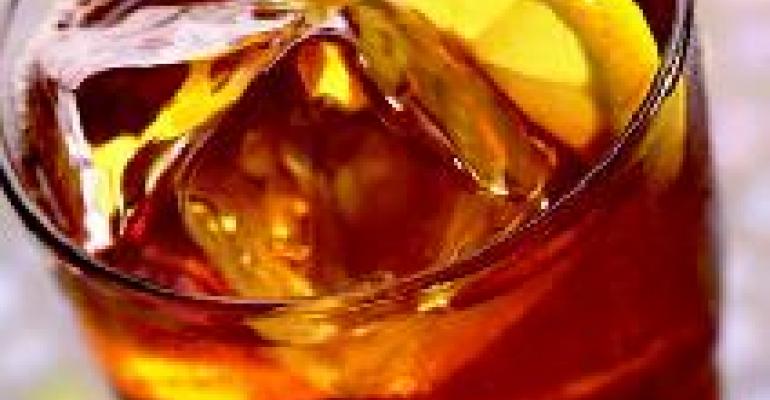 Even When Chilled, Tea is Hot

We should all have futures as bright as the one ahead for tea. George Jage, president and founder of the World Tea Expo, cites an industry estimate that sales of tea are expected to nearly double in the United States by the year 2010.

Geoff Alexander knows all too well how popular premium tea is becoming. He is the managing partner of Vong's Thai Kitchen in Chicago, a restaurant in the Lettuce Entertain You portfolio and brainchild of internationally acclaimed chef Jean-Georges Vongerichten. "Here in Chicago we're seeing tea shops opening at a rate that would impress even Starbucks," says Alexander.

"While the concept of our restaurant naturally makes people consider drinking premium teas, demand over the past year has exceeded all of our expectations."

Vong's Thai Kitchen may well be any tea enthusiast's dream come true. During January, the popular eatery held a wildly successful promotion celebrating the many dimensions of tea. The month-long festivities offer a graduate-level perspective on how to creatively market tea.

Every Tuesday night during the month, Alexander set up a table near the front of the restaurant on which he laid out an array of bowls containing ingredients used in blending tea¯botanicals such as dragonwell, dried mangos, coconut and apples, various varieties of flowers, and loose green, red and black teas. Guests interested in creating their own blends of teas specifically geared to their individual tastes could do so. A member of the restaurant's staff would work with the guest, lending guidance and offering advice. Once the blend was created, the products were placed in a silky mesh bag and served tableside.

According to Alexander, his guests found the presentation fascinating. "It's intriguing to look at the various ingredients used in premium blends of tea. The botanicals themselves are beautiful and highly aromatic. If you examine coffee beans, for example, they're oily and largely similar in appearance. Not so with tea. The ingredients reinforce the notion that drinking is a natural, holistic and essentially healthy thing to do."

Alexander and staff also thought that it would be fitting to devise several cocktails that featured tea as an ingredient. Both were extremely well received. The Chamomile Mojito ($4.95) is prepared and served in a similar manner as the conventional recipe with the notable additions of lemongrass syrup and 11/4 ounces of Chamomile Citron Tea. The Cosmo-Tea-Ni ($5.95) is a satiny blend of Chambord, Smirnoff Citrus Vodka, a splash of cranberry juice, and Berries and Blossoms Tea.

Every Saturday afternoon high tea is held at Vong's Thai Kitchen. It's an elegant, well-attended affair that celebrates both tradition and the delights of tea. Guests are tempted with sumptuous Thai finger foods and a selection of exotic blends of tea from which to choose. To answer any questions guests may have about a certain tea, the staff will bring out test tube samples with the contents of the blend so patrons can experience first hand the feel and aroma of the botanicals. The weekly event is moderately priced at either $13 or $15 per person.

Alexander and company regularly promote an assortment of bubble teas. These refreshing, attention-grabbing concoctions are made with iced tea, fresh fruit and either green or black tapioca balls. Popular flavors include cantaloupe, blueberry and watermelon.

If Geoff Alexander's perpetual smile and the demand for tables at Vong's Thai Kitchen are any indication, tapping into the growing popularity of tea is simply good business.—

Robert Plotkin is a judge at the San Francisco World Spirits Competition and the author of numerous books including the 5th edition of The Bartender's Companion: The Original Guide to American Cocktails and Drinks.