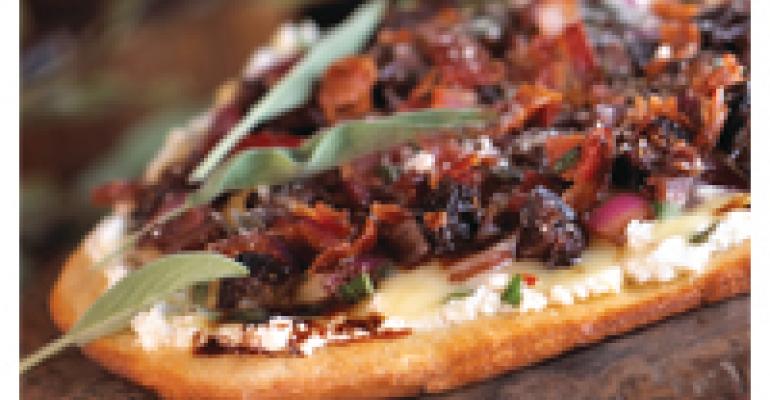 To a small 6” saute pan over medium heat, add pancetta or bacon and cook for 3-4 minutes until browned and crisp. Remove pancetta from the pan, leaving the fat, and add onion. Saute over medium heat for 3-4 minutes until soft and caramelized. Add the fig, vinegar and cranberry juice and place on low heat for 5 minutes, until the liquid is reduced by half and the onion/fig mixture is soft. Remove the pan from heat and pour remaining liquid in a small container, reserving for pizza garnish.

Spread 3 Tbsp. ricotta on each pizza shell, leaving a ¼" border. Layer remaining ingredients by sprinkling ¼ cup Fontina, ¼ cup onion /fig mixture, 1 Tbsp. Parmesan and 2 Tbsp. pancetta atop each pizza. Place pizza shells on an oiled baking sheet and bake at 400°F for 12-15 minutes until cheese is melted and crust is golden and crisp. Remove from oven and let rest 2 minutes.

Cut each shell into 6 triangles. Drizzle each triangle with remaining liquid from the onion/fig mixture and sprinkle with chopped sage and freshly ground pepper. Serve 3 triangles per order.