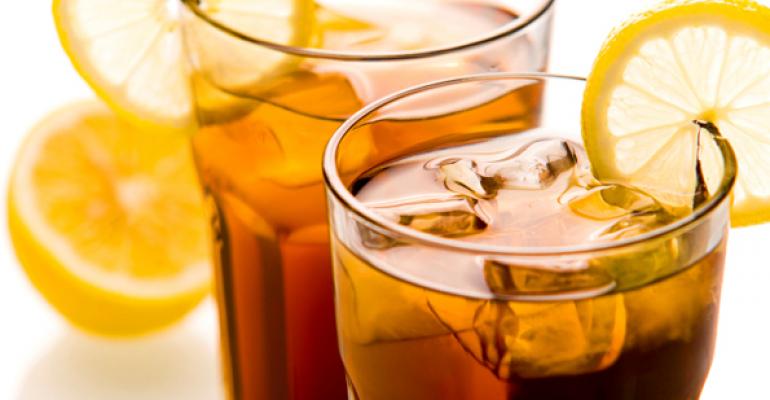 In June, iced tea is definitely the flavor of the month: It’s Iced Tea Month. While not all of the tea action is taking place in foodservice,  it seems that iced tea now boasts a coolness quotient not seen since it inspired the tealess Long Island Iced Tea cocktail back in the 1970s. As George Jage, director of the World Tea Expo has said, tea is undoubtedly on the upswing in North America.

According to the Tea Council of the USA, approximately half of Americans drink tea on an average day, with the greatest concentration of tea drinkers in the South and Northeast. Iced tea accounts for an estimated 85 percent of tea consumption. Restaurant operators have benefitted from this trend, with away-from-home tea consumption increasing by at least 10 percent annually over the last decade.

• A flavorite drink: The proliferating flavors and styles of iced tea were in evidence at  The North American Tea Championships in Las Vegas last month, with the 19 first-place winners ranging from sweetened and unsweetened, green teas and flavor combinations featuring hibiscus, acai, pomegranate and more.

• Iced tea is smokin’ hot: According to the McCormick Grill Mates & Lawry’s Flavor Forecast 2013 Grilling Edition, sweet tea is one of the flavors consumers will be thirsting for at cookouts this season.

• Tea as a cocktail ingredient: Iced tea isn’t just a teetotaler choice. At numerous bars around the country it’s possible to have tea incorporated into a cocktail. At Parm in NYC, for example, the Chinatown Fling is made with tea-infused gin, cherry and Aperol. At Founding Farmers in Washington, D.C., the Constitution cocktail features gin infused with chamomile tea, ginger and blueberries, lemon juice and a splash of seltzer. Mokoto in Bal Harbour, FL, offers the Green Tea Caipiroska with house-infused green tea, vodka, muddled lime, green tea and fresh mint.

Check out these four recipe ideas for Iced Tea Month: