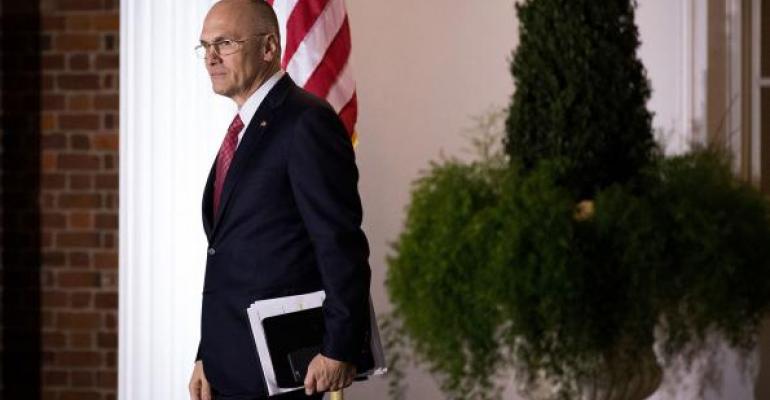 What Andy Puzder means for restaurants as labor secretary

The industry gets one of its own in the White House with the appointment of the Carl’s Jr. CEO

When Donald Trump announced plans to nominate Andrew Puzder, the CEO of CKE Restaurants Holdings Inc., to head the Department of Labor, the idea was not a surprise.

Trump has nominated a series of industry executives and proponents of deregulation to head many federal agencies. Puzder, a big Trump backer during the election, fits well with that group.

For the restaurant industry, however, the announcement was something altogether different: The move puts a foodservice executive at the head of a department many restaurant operators consider overbearing.

Puzder isn’t simply an ally of restaurant business executives. He’s one of them, a man who has spent years at the head of one of the largest quick-service companies in the country. His ascendance to labor secretary, assuming he gets Congressional approval, puts the restaurant industry’s concerns front and center while making a wholesale change to the regulatory environment of the past eight years.

As Sec of @USDOL, I look forward to working w/ @realDonaldTrump to enact policies that create #jobs & grow businesses #DepartmentofLabor

“We always find in Washington that policy makers don’t understand the business model for restaurants, how complicated it is in supply chain, human resources and technology,” Rob Green, executive director for the National Council of Chain Restaurants, said. “He’s going to bring that perspective to the table.”

Conservatives largely praised the move. Jeb Bush, who himself had been a candidate for president, called Puzder a “strong conservative leader and successful businessman who will do a phenomenal job as labor secretary.”

Puzder was an attorney in St. Louis when he met Carl Karcher, who founded Carl’s Jr. Puzder moved to California in 1991 to serve as Karcher’s personal attorney, according to a biography on Puzder’s blog, andy.puzder.com. Puzder helped Karcher avoid bankruptcy and help retain ownership of his company, CKE Restaurants.

Puzder ultimately took a position with Fidelity National Financial under its chairman, William Foley, before taking a position as general counsel of CKE in 1997. Puzder was with the company when it purchased Hardee’s Food Systems, and in 2000 was named CKE’s CEO.

CKE was a publicly traded company in 2010 when it was taken private by the private-equity firm Apollo Management. Three years later, Roark Capital acquired CKE from Apollo. Puzder maintained the CEO role throughout.

“Andy Puzder has created and boosted the careers of thousands of Americans, and his extensive record fighting for workers makes him the ideal candidate to lead the Department of Labor,” President-elect Trump said in a statement.

“Andy will fight to make American workers safer and more prosperous by enforcing fair occupational safety standards and ensuring workers receive the benefits they deserve, and he will save small businesses from the crushing burdens of unnecessary regulations that are stunting job growth and suppressing wages.”

An opponent of workforce regulations

Puzder has been an increasingly vocal critic of what many in the industry view as an overly aggressive regulatory environment under President Barack Obama. He has written numerous guest columns for publications like Forbes and the Wall Street Journal on employment issues, and has given several interviews.

“We have had seven years of the Obama administration doing everything they possibly could to keep us from opening new businesses,” Puzder said earlier this year. “The difficulty we face is that we don’t worry about our competitors. We worry about the government, particularly in states like California and New York.”

His view on regulation is echoed by many in the industry. Restaurants employ large numbers of low-skilled, low-wage workers. These employees have been a primary focus of the Obama administration, and of labor advocates who have led protests against such chains as McDonald’s Corp., pushing for higher wages.

Numerous regulations in recent years have been aimed at restaurants and at quick-service chains in particular. That includes overtime rules dramatically increasing the pay rates at which managers can be considered exempt from overtime pay; rising minimum wages; rules making franchisors liable for the actions of their franchisees and the Affordable Care Act all seem to impact restaurants far more than other industries.

The future of regulations enforcement

With Puzder at the helm, the industry can expect a dramatic shift in that view.

“The real question is now whether they’re going to kick over the whole apple cart,” said Franklin Coley, a partner with the public affairs firm Align Public Strategies. “The question is how far down the list they go before two years are up and Congressional elections maybe change things a little bit.”

It’s widely expected that the Department of Labor under Puzder will tone down new overtime rules, most likely by reducing considerably the proposed salary at which managers could be considered exempt. Yet many of these rules take time to change.

The most immediate change is likely to be a shift away from enforcement and toward education, working with employers to get them to comply, rather than simply fining them. Under Obama, the enforcement budget at the Department of Labor ballooned, said Joe Kefauver, Align Public Strategies managing director.

A Puzder-led Labor Department can change that much faster than it can change any regulation.

To be sure, Puzder’s own company and many of its franchisees have been a target of that policy — Hardee’s agreed to pay $58,000 for unpaid overtime after an investigation in 2006 and 2007, according to the Huffington Post.

And for all of Puzder’s complaints about the impact regulations have had on industry growth, restaurants have in fact been adding jobs at a higher-than-average rate in recent years. That’s led to a labor shortage that has driven up rates in many markets faster than increases to the the minimum wage laws.

Liberal groups, particularly those that have been pushing for higher pay and better conditions in the restaurant industry, were highly critical of the Puzder nomination.

“We do focus our ads on 18- to 34-year-old males,” Puzder said earlier this year. “We’re shooting at a dartboard not with a dart, but with a shotgun.”

Still, based on his comments and his record at CKE, Puzder is a pragmatic leader who sees trends and is unafraid to adapt to them. While Carl’s Jr. and Hardee’s happily flaunted skin, for instance, it was also the first major quick-service chain to sell an all-natural burger with grass-fed, hormone-free beef.

“It wasn’t in reaction to Shake Shack or Five Guys or Smashburger,” Puzder said. “I have a 23-year-old son. He’s more concerned with where it’s sourced. He cares. And as long as Millennials care, we’re going to care.”

“Andy is going to bring more clarity to the Department of Labor, and more certainty,” Green said. “He’ll go about it in a very methodical way. He’ll look at it from all perspectives — all rules, all regulations. It will be easier to anticipate. And when you’re running a business, you want certainty.”