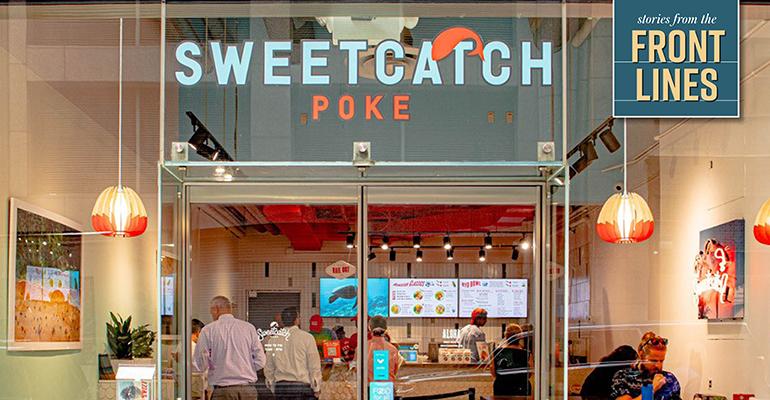 Frank S. Vellucci, like many New York City restaurant owners, is still struggling at this stage of the pandemic. Photo provided by Sweetcatch Poke
People

Frank S. Vellucci — owner of five-unit chain Sweetcatch Poke in New York City — discusses how the city’s COVID-19 phase two and three plans allowing for indoor dining and outdoor dining on the street do not help all business owners

In New York City, restaurants were allowed to open up outdoor dining during phase two of the city’s coronavirus recovery plan. Indoor dining was supposed to be included in phase three but was scrapped at the last minute due to safety concerns. But Starting July 6, New York City closed 22 streets around the city to make room for expanded outdoor dining.

Frank S. Vellucci is one of many restaurant owners struggling to keep up with the rule changes for restaurants, and he thinks the city needs to do more than just shut down streets.

We were just getting geared up for our busy season of March through September and then we got hit hard by COVID. I recognized that COVID was going to be a gamechanger around March 11. I talked to my landlords about it because I knew that even if it was a minor setback I knew it was going to hurt us a lot because of the timing during our busy season.

Our business took a big hit because we are situated near large office buildings and with those office buildings being empty it took a big hit to our revenue. We pivoted and we decided to keep all locations except one open […] We tried to keep on as much staff on as possible. As time went on, I knew we needed to come up with new agreements with landlords. Even though the city is opening up and we’re in phase three now, there’s still not a lot of office workers and a lot of commuters made the decision not to come back [to work] until after Labor Day, so that will be a big hit to everyone’s business. […]

Related: New York City commits $2 million in grants of up to $30,000 each for independent restaurants

But you roll with it and do your best: you care about your customers that you want to be safe, you roll out the QR codes, the delivery apps, and social distancing rules to keep employees and customers safe, and stay hopeful that business will return.

Right now, I wish we could do in-store dining, but I understand the concern; I just wish it was a little fairer in terms of the last-minute decision. We had already started ramping up and training our new staff and bringing in more inventory, and then we find out the announcement [that dining rooms would not be opening in phase three] and it puts yet another burden on restaurants and creates further losses. With outdoors seating allowed, a lot of people can enjoy that, but our locations don’t have that opportunity to take advantage of the street in front of them. There are rules, and it has to be an area that you can take over, but if you’re in front of a bus stop or a no-stopping zone, then you can’t utilize that space.

The delay in reopening indoor dining has hurt us. But it’s just a matter of more people in the city and more customers coming in. In all honesty, until office buildings open up and become occupied, our businesses will continue to suffer. People want to spread out and eat outside and our spaces don’t allow that.

I think the government still needs to do more. The city’s going to be a lot different now. I have a client who was mentioning to me he had gone to his summer home and I asked, “when are you going to come back?” and he said, “New York loses its glamor when you have no restaurants, no theater none of these activities.” it takes away from ambience of New York City. I think it’s important that our elected officials realize the fabric of New York is these restaurants and they need to support them even further.

One of the biggest expenses in New York City for small businesses is rent and there needs to be further rent relief and help for landlords so those landlords can in turn give relief to the tenants. […] Without any change or adjustment of rent, I am out of business and personally bankrupt, and I think a lot of restaurant owners are in that position. So that’s what we need and that’s why I say that while outside and street dining is great, there are winners and losers and for the city not to lose a good part of their restaurants, they need to recognize there are restaurants that are unable to take advantage of that boost. […]

I think they need to become even more creative to help out small businesses and restaurants trying hard and doing everything possible to stay afloat and provide jobs.

This is part of our Stories from the Front lines series.