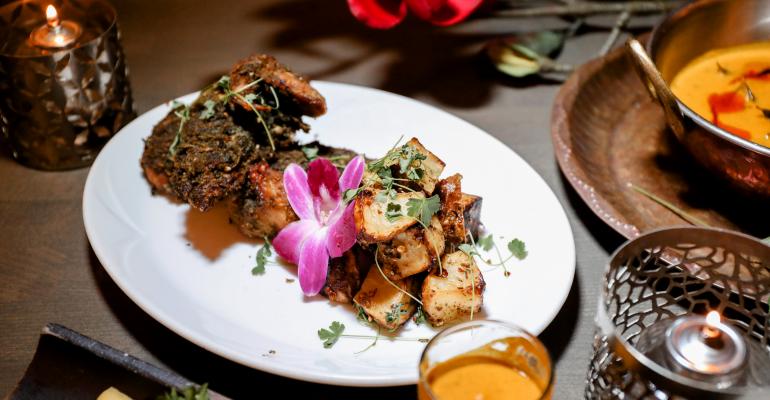 Vermilion’s menu is also designed to be provocative.
People

Ask Rohini Dey, Ph.D., founder of Lets Talk Womxn, and this year’s MenuMasters Innovator of the year, about the menu at her Chicago restaurant Vermilion and you will likely get a history lesson or two.

That’s because the Indian/Latin restaurant she opened in December 2003 was designed to capture the cuisines of India through the lens of the many cultural influences of its history, including the Persians, Moors, Spanish and Portuguese.

There’s a reason why someone raised in India can walk into a Latin market and find fundamentally familiar ingredients — from tamarind and mango to cilantro, mint and cumin — and why paella is so similar to pullao. Sure, it’s a story about colonization and migration, but at Vermilion it’s a celebration of “the boldness and warmth” of Indian and Latin cultures.

In April, for example, the restaurant was rotating versions of stuffed naan, including an Iberian version with chorizo and olives, as well as an achari chicken kebab option. The cocktail list has a Bucket List Pani Puri Margarita; a Mango Mint Mojito; and a Brazilian Lychee Caipirinha alongside a “sensually spicy” Bollywood Item Number cocktail with vodka, pear, green chile and lime. One of the dishes on the menu since day one is a tandoori skirt steak, above, in the restaurant’s classic marinade with yogurt and cooked in a tandoor — controversial to some because eating beef is prohibited in many parts of India because of the large Hindu population. Dey said the dish is her way of protesting the history of “beef lynchings” of Muslims. “This is my big fuck-you stand,” she said.

And, frankly, Vermilion’s menu is also designed to be provocative, she said.

“I really didn’t want to do anything French,” said Dey. “It infuriates me that the world [at the time] considered French and European cuisine the bastion of fine dining. The rest of the world has thousands of years of culinary fine dining.”

A former economist and management consultant, Dey will be the first to point out she isn’t a chef, though she takes a hands-on approach to every aspect of the menu, she said.

“I would over my dead body be a chef,” she said. “But I’m very involved. I love good food and flavors. I travel extensively, and I reverse-engineer. I have launched many a chef.”

The pandemic has been hard on Vermilion. Delivery and takeout kept the restaurant alive through dining room closures, and Dey said, “We’re still doing delivery, but it’s not a panacea at all.”

Dine-in guests have come back, but the neighborhood around the restaurant has languished, said Dey. Office traffic has not returned and several businesses on the block have closed permanently.

But Dey now knows she is not alone.

The network of Let’s Talk groups has spread across the country. In Chicago, it has allowed participants to host dinners and other events together to showcase the female-owned businesses and “be scrappy” in generating traffic to their restaurants.

Right now for Let’s Talk members, the conversation is about rising costs and shrinking margins. “The costs of operations have soared so much, and a big chunk of us are running in the red,” she said.

But Dey said she remains philosophical. “I’m a fighter,” she said. “I am going to fight.”