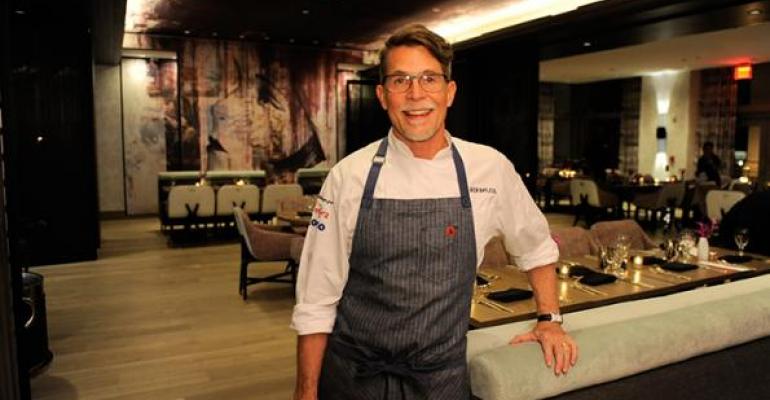 BAn independent jury recognized Bayless for his accomplished work as a chef, restaurateur, author, television personality, environmental advocate and philanthropist. Bayless will collect the award from the Julia Child Foundation for Gastronomy and the Culinary Arts at the Smithsonian's National Museum of American History during a gala on October 27.

A $50,000 grant that accompanies the award will go to the Frontera Farmer Foundation, a nonprofit organization that Bayless and his team founded in 2003 The foundation is committed to promoting small, sustainable farms serving the Chicago area by providing them with capital development grants.

Bayless is arguably best known for his award-winning restaurants in Chicago, which include Frontera Grill; Topolobampo (1991); Xoco, Tortas Frontera and Frontera Fresco. This month he's adding Leña Brava and Cruz Blanca Cervecería to the portfolio.

Over a long career he has racked up seven James Beard Awards (Midwest Chef of the Year, National Chef of the Year, Humanitarian of the Year, Who’s Who of American Food and Drink, Best Podcast, plus two for his cookbooks), penned nine cookbooks and appeared on or hosted a variety of television cooking shows, including the long-running Mexico—One Plate at a Time on PBS.

“Rick Bayless represents everything the foundation sought to recognize in creating this award, says Eric Spivey, chairman of the Julia Child Foundation. “We applaud Rick’s achievements as an industry leader and a humanitarian who has championed educating Americans about Mexican cuisine just as Julia did with French cuisine. The Foundation is delighted the Award’s grant will enable Rick’s foundation to expand its valuable work,” he adds.

"For me, receiving this incredible honor is truly coming full circle,” Bayless says. “I was raised in my family's barbecue restaurant, but it was Julia who was responsible for awakening me to cooking's fullest possibilities. Some of my earliest, most vivid memories are of two things: learning to barbecue ribs alongside our restaurant's pit master and watching Julia on television, completely transfixed by the complexity and precision she brought to recipes like coq au vin, napoleons and crepes Suzette—all of which I tackled at 12 years old in my mom's home kitchen."

Created by Julia Child, the foundation has become one of the leading grant-giving private foundations solely dedicated to supporting the field of gastronomy and the culinary arts. In 2015, the foundation established the Julia Child Award to continue to foster Julia’s legacy, while also honoring an individual who has made a profound and significant difference in the way America cooks, eats and drinks. Last year’s honoree was legendary chef, cookbook author and culinary personality Jacques Pépin.