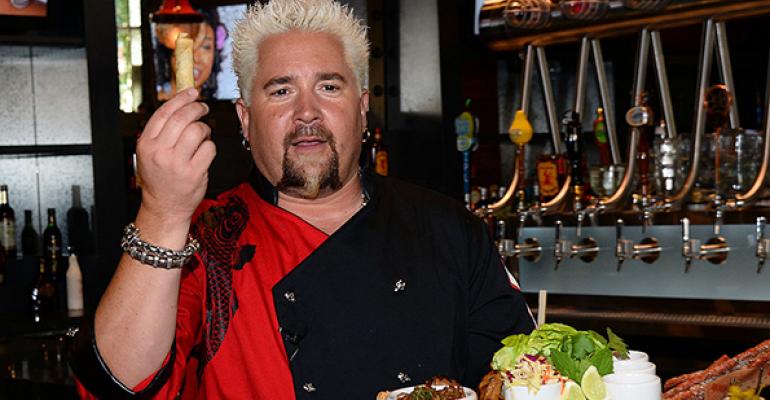 <p>Fieri, who ended a two-decade partnership, has his hands full with multiple concepts and Food Network commitments.</p>
People

The agreement amicably ends the 20-year partnership between Fieri and Gruber, who co-founded Johnny Garlic’s Inc. in Santa Rosa, CA, in 1996. The company operates eight restaurants in California, including seven Johnny Garlic’s and one location of the sushi-barbecue concept Tex Wasabi’s in Santa Rosa.

Terms of the deal were not disclosed, but Gruber has purchased all of Fieri’s stock in the company. Gruber plans to evolve the concept as a craft bar and scratch kitchen with small plates, handcrafted cocktails and craft beer on draft, the company said in a statement.

A new menu is scheduled to debut this summer that will take the concept in a new direction, officials said.

“It’s an exciting day!” said Gruber in a statement. “I started Johnny Garlic’s as a partnership nearly 20 years ago and, after two decades, it’s an opportunity for the brand to evolve and grow.

“We’re taking time to really listen to our guests, rework some of our operations, and plan for some big announcements early this summer to kick off our 20th anniversary,” Gruber added.

Fieri, meanwhile, has a number of other restaurant concepts, including Guy’s American Kitchen and Bar in New York City, which has a variation in the Cancun, Mexico airport and several U.S. cities; along with Guy’s Bar-B-Que Joint.

In addition, Fieri continues to appear on various TV shows, including the Food Network’s Diners, Drive-Ins and Dives.