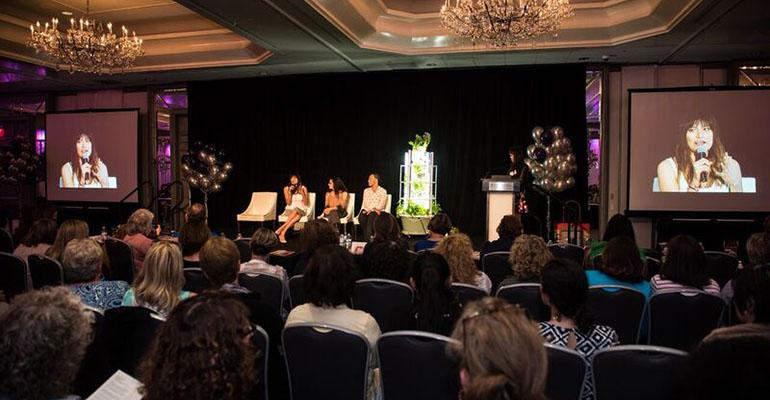 Helene Kennan, chief innovations officer for corporate foodservice contractor Guckenheimer Enterprises, said she wasn’t much of a risk taker when she was approached for her current job.

Kennan had spent 18 years working with Bon Appetit Management Company and hadn’t been planning a move. But when the opportunity was presented, Kennan realized how unprepared she was to make the life-changing decision she faced.

“Women just don’t think about how good we are,” she said. “I learned that I just didn’t know a whole lot” about negotiating a big career move.

Kennan was one of an array of women across the foodservice industry who shared their experiences at the recent Women Chefs and Restaurateurs conference held in Los Angeles.

On a panel about talent, Kennan and others shared inspiring stories about climbing the career ladder and creating their own success.

When faced with her big job move, Kennan said she turned to a job coach specializing in the hospitality industry—Debi Benedetti, who was also on the panel—who helped navigate the complex negotiations that can come with such a move, from salary to key man insurance.

Women, she said, need to learn to think more strategically about their professional goals.

“This wasn’t anything I had planned,” said Kennan. “But when opportunity knocks, you better be prepared to answer that door.”

Elizabeth Blau, founder and c.e.o. of restaurant development company Blau + Associates, said she got her start as a “taco girl” at 16. She later worked for acclaimed restaurateur Sirio Maccioni at Le Cirque as it moved to Las Vegas. There, she worked with casino developer Steve Wynn to develop restaurants at the Bellagio, launching a transformation of Las Vegas from culinary desert to celebrity chef hotspot.

Pauline Lam, executive pastry chef at Google, told her story of climbing from “bake sale mom” to the producer of 22,000 desserts every day out of a small kitchen with a kitchen staff of only 26.

When asked about her management style, she said, “I run it like a gang. It’s mafia-ish, a very tight-knit group, very loyal and they work hard. And there are cookies.”

Bricia Lopez, co-owner of the James Beard Award-winning L.A. restaurant Guelaguetza, said her world changed when she had her first child, now 1 year old. “The only thing I could talk about was my kid,” she said.

So she launched a podcast about parenting, inviting women to talk about the good, bad and the ugly sides of motherhood, and to allow herself an outlet for that side of her life.

Nina Curtis, executive chef of The Ranch at Live Oak Malibu wellness resort, said body building and adopting a vegan diet helped her become a better chef, one with a better understanding of how food impacts health.

Here’s some advice from the wide-ranging panel:

• On recruiting talent in a starved labor market: “Create talent incubators,” said Kennan. “If you have to rely on Craig’s List, you’re done.”

• On making a step from restaurant to corporate chef: “People think that if you’re a corporate chef, you’ve sold out, that you don’t care about the craft,” said Kennan. “But that’s totally untrue. Now I have more time to cultivate the craft now that I don’t have to be married to my restaurant. I think we need to value every kind of opportunity out there.”

• On defining life balance: “It’s beautifully done juggling. For everyone that’s different,” said Alicia Boada, a technical advisory for Barry Callebaut North America. “When you do it well, there’s balance.” Added Lopez: “Life balance is when you stop caring what other people think.”

• On maintaining a balance: “Put the cell phone down,” said Blau. “In today’s world, people expect to hear from you immediately. The boundaries of work hours are really gone. But you also have to set those internal boundaries.”

• On job interviews: “Learn how to tell your story,” said Benedetti, who was a founding corporate officer for Bon Appetit Management and more recently founded coaching firm Beyond the Possible. “Make a connection. Think about having a beginning, middle and end to your story. And remember that people will only remember four or five things.”

• Advice for your younger self: “As women, we put an enormous amount of pressure on ourselves. There’s a lot on our plates,” said Blau. “I would tell myself to slow down and savor every moment of the journey, instead of always moving on to the next thing.”