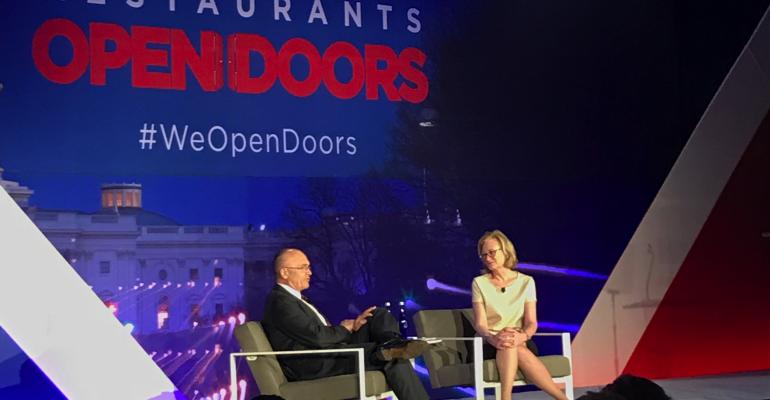 In January, Puzder went from being known as CEO of Carl’s Jr. and Hardee’s, to one of President Donald Trump’s most vocal foodservice supporters, to the U.S. labor secretary nominee.

After weeks of delays in his appointment hearing and attacks by liberal groups, Puzder finally withdrew as the nominee when a number of senators expressed wavering support.

Earlier this week, Puzder spoke to a room of restaurant executives at the National Restaurant Association’s Public Affairs Conference in Washington, D.C., about his perspective on the process. While the nomination process was ongoing, Puzder said he was forbidden to respond to any allegations.

“They put you in a ... cone of silence. You can’t talk. Which drove me nuts because I couldn’t go on any TV show. They wouldn’t even let me tweet. They attacked Trump, and at least he could tweet,” Puzder said.

Puzder maintains that the allegations in the media about him and his company were false or overblown, such as a Bloomberg report of wage and bias claims from workers.

“Zero of them were company restaurants,” Puzder said. “Zero were intentional violations, all according to the Department of Labor.”

After he was nominated as labor secretary, the media reported on his alleged hiring of an undocumented housekeeper. Puzder acknowledged that his wife had hired an undocumented worker, but said that he fired her once he learned of her immigration status.

CKE recently named former KFC CEO Jason Marker as the new CEO of Carl’s Jr. and Hardee’s, replacing Puzder in April. The transition to new leadership, according to Puzder, was a long time coming, with his team starting succession planning in January 2016.

Puzder had originally expected for his next project to involve political writing, but said he would have liked to work in public service.

“There isn’t a country in the history of the world where a working class kid like me could aspire to this level of success and have any realistic opportunity to achieve it. And I think that’s probably true for most of the people in this room. That’s worth protecting. And when you benefit from that, you should give something back,” he said.

Puzder will be going back to his original plan to write with a new book deal.

On filing his ethics paperwork

"As my hearing kept getting delayed, some of you may have read I didn’t file my papers. They kept saying, ‘Puzder hasn’t filed his ethics papers.’

Well, that was BS. I filed my ethics papers Jan. 3. I was filed before Betsy DeVos. But the Office of Government Ethics has to approve your filing, and they’ll make recommendations, and you’ll need to make changes.

In the meantime, my hearing kept getting continued and continued, and there were some Republicans from what I’ll call purple states that started to get nervous. They went home after Betsy DeVos was confirmed … and they saw picketers and demonstrators, people that had never seen picketers or demonstrators ever before. …

When the Left perceived there was this nervousness, and I was kind of the last guy standing that they wanted to go after, they went after me with great intensity.

My particular problem was there is no way in the world the Democrats wanted a successful businessperson to be heading the Department of Labor, particularly someone who understands how jobs are created and could help generate that kind of growth. I don’t think the Democrats were at all fearful that I would be oppressive of workers. I think they were fearful I would be successful in helping workers."

On staying until the end

"Quite honestly, I’m 66 years old. As I said, I started out as a working-class kid, paid my way through law school and college. You know, I never was a Boy Scout. I’ve lived a very full and interesting life.

I told the transition team in early January, ‘These issues they are trying to make a big deal out of are false. They are not true. There’s plenty of evidence to show none of the things they are saying are true, but they don’t seem to be going away.’

I was told by the highest level of Trump Tower, ‘There’s no effing way you are resigning.’

On the delayed hearing

"It was hard. I was a trial lawyer coming up. I wasn’t in the restaurant industry when I was a young man… and the most frustrating thing was when they settled. You know, because you prepare you prepare, you prepare, you do depositions… you get everything done, you get your cross examine in, you are ready to go and it settles. And it’s such a letdown.

Well, this was worse. This was much, much worse.

If they had the hearing today, I’d be ready to go. I’m ready after this. If they said, ‘Andy, you can have the hearing. It’s at 5 o’clock,’ I’d be there. It was my chance to respond to the inane and false accusations against me and my family. I never quite got that chance. I’m very disappointed about that."