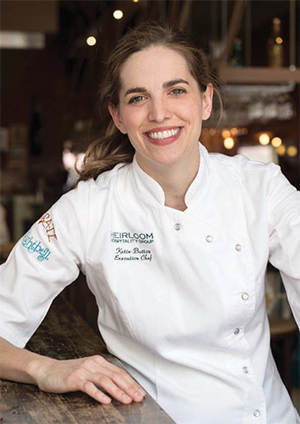 Katie Button is an unlikely chef in an unlikely restaurant town. In 2007, after leaving Cornell University with a degree in chemical and biomolecular engineering, she slammed on the brakes. The plan was to enter a prestigious PhD program in neuroscience, but she bailed. As for why, you can have that complicated conversation with her on your own time. What we known for sure is that she took off for Washington, DC, to work with José Andrés at Café Atlantico/Minibar. Andrés is a bit of an egghead himself, so perhaps that was the allure. In any case, at the café she met Flelix Meana, who had worked as a service manager at El Bulli, Ferran Adria’s legendary restaurant in Spain. That chance meeting eventually led to a seven-month stage at El Bulli, which had tremendous influence on Button’s cooking style. From there she moved immediately to Asheville, NC, where she opened Curate, an authentic Spanish tapas bar built in a former 1920s bus depot. How odd it must have been for the folks of Ashville to have a biomolecular engineer stroll into town to serve Spanish tapas in the heart of farm-to-table country. Nevertheless, her work at Curate (pronounced coo-rah-tay), earned her the respect of locals and garnered a slew of awards, including nominations for Rising Star Chef from the James Beard Foundation. Add to that a nod from GQ, which put Curate on its list of the Twelve Most Outstanding Restaurants of 2013. Most recently, Button opened a second place, Nightbell Restaurant & Lounge, which also serves small plates, but with an American twist. Does Asheville lament the loss of a neuroscientist to the food world? Let’s do the math: Instead, it got a beautiful brainiac creating mind-blowing food at a world-class tapas bar. That’s not a bad tradeoff.