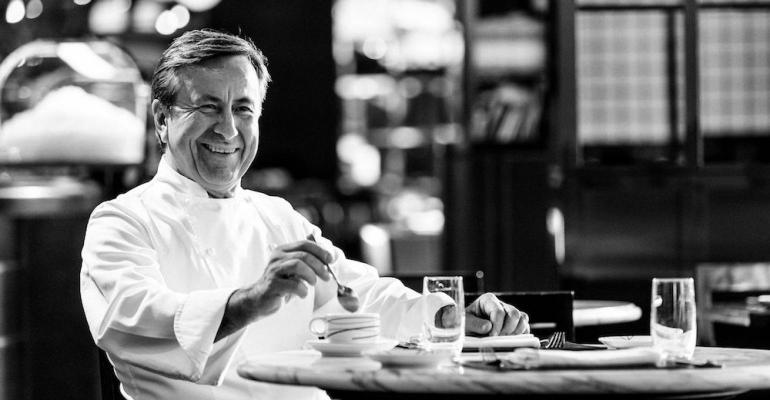 Jeff Chouw
Café Boulud closes after 20 years in New York City and more news from the past week.
People>Owners

The latest restaurant to attempt the tip-free model is the iconic San Francisco restaurant Zuni Café.

Chef Nate Norris, who has been executive chef since 2004, told SF Gate, “It's really important that people are paid fair wages and that their work is valued properly.” He emphasized that the move was inspired by the front- and back-of-house pay inequities.

The move was hailed by advocacy group One Fair Wage, which has long argued that tipping is a legacy of slavery.

“What we do know, generally, is that the higher the wage and the less dependence on tips, the less of the biases that emerge from tipping can impact workers,” Saru Jayaraman, president of One Fair Wage, has said regarding the issue of tipping.

However, not everyone is enthused about the change at the restaurant that received a James Beard Award for Outstanding Service in 2018.

According to reporting by SF Gate, the new starting wage would amount to about $24 an hour, though the company said wage negotiations with returning service staff were ongoing. A former employee, who spoke on the condition of anonymity, said that would amount to about $840 per week, based on a 35-hour week, before taxes. Previously under the tipping model, he said he earned a little over $1,500 per week.

In place of tips, Zuni Café will implement a mandatory 20% service charge, as well as raising menu prices. No word yet on if guests will be able to tip above the amount on the bill.

After passing the General Assembly in March, Georgia Gov. Brian Kemp has signed SB 236 into law, allowing restaurants to sell cocktails to-go. As with every other liquor law in the state, municipalities and cities can opt-out.

Under the new law, restaurants with a liquor license are now allowed to sell up to two drinks per entrée for to-go meals in Georgia. The cocktails or drinks must be sealed and in pre-approved containers, then placed into the back seat, glove compartment or trunk of a car.

Cocktails must be made the same day the drinks are ordered and contain no more than three ounces of distilled spirits. Drinks must also be sold to and picked up by the same person who ordered, which means people can’t order to-go cocktails for delivery via third-party services like Uber Eats, Zifty, or Postmates.

Read more: To-Go Cocktails From Georgia Restaurants Get the Governor’s Seal of Approval

After 12 years, Denver chef Troy Guard will officially close his signature restaurant TAG on May 15 as a result of the ongoing coronavirus pandemic. Despite the restaurant’s profitability, the Denver restaurateur will close his eponymous restaurant in light of the current environment which has made staffing restaurants increasingly difficult. Instead, Guard told Restaurant Hospitality he’s focusing on growing concepts that require less labor, like fast-casual Bubu.

All 25 employees of fine-dining TAG were offered jobs at other TAG Restaurant Concepts establishments and have remained with the company.

Though Guard is growing his other concepts, the closure of single-unit TAG is tough for him.

“Someone's got to take the hit sometimes. And I just think this is the best way to do it. It hurts. It's bittersweet. It sucks. But I think in a year, in five years, I hope they look back and say that was a great decision that we made.”

Chef Daniel Boulud has officially closed his Upper East Side restaurant, Café Boulud, after 20 years in New York City. After months of uncertainty following the sale of the hotel the restaurant resides in, the restaurant decided to permanently close after talks with the new owners.

The Surrey Hotel, which housed Café Boulud, was previously run by Denihan Hospitality Group, which declared bankruptcy during the pandemic. It was bought out by U.K.-based billionaire real estate investors the Reuben brothers.

Boulud told The New York Times that the hotel’s new owners “wanted to take the restaurant in a direction that didn’t suit me.” Café Boulud never reopened after pandemic-related dine-in shutdown in March 2020.

In its place, the Miami restaurant Casa Tua will open. The Café Boulud outpost in Massachusetts that began as a temporary pop-up, however, has been named a permanent restaurant at the Blantyre Hotel.

The restaurant industry has been facing a massive labor shortage since in-person dining has resumed in some states across the country.

A new report by One Fair Wage states that 53% of restaurant employees are considering leaving their restaurant jobs, with an overwhelming number of them citing low wages over COVID health concerns.

Mothers were also more likely to report tips decreased with the pandemic (91% versus 86%) and that their tips have decreased by half or more (73% versus 67%).

Read more: It’s a wage shortage not a worker shortag