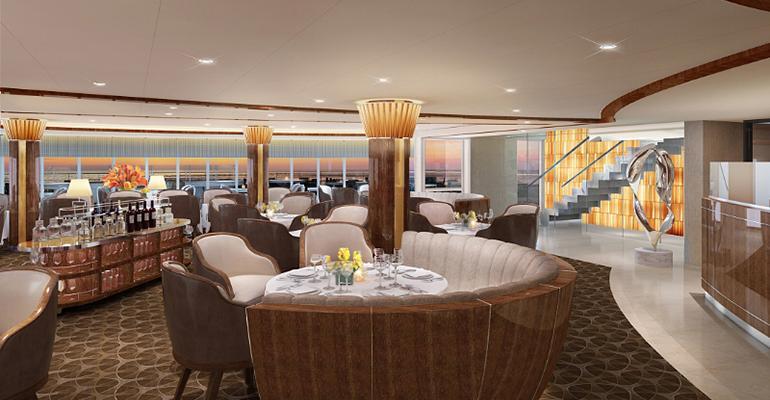 <p>Rendering of the new signature restaurant, The Grill by Thomas Keller, aboard the Seabourn Encore.</p>
People>Owners

Operators of Seattle-based Seabourn, which bills itself as the world’s finest ultra-luxury cruise line, are planning to debut a new restaurant, The Grill by Thomas Keller, in May on board the Seabourn Quest.

The restaurant will eventually be on all of Seabourn’s vessels, including the new Seabourn Encore, scheduled to launch in December and another ship to come in 2018. Existing ships Seabourn Sojourn and Seabourn Odyssey will under go restaurant renovations this year to convert to The Grill, according to the cruise line operator.

The Grill is a collaboration between Keller and restaurant designer Adam Tihany. Seabourn president Richard Meadows says the concept will “take our already award-winning cuisine to new heights.”

The restaurant will serve dinner only and, because Seabourn is an all-inclusive cruise line, there will be no additional charge to dine there.

More details on the menu will be revealed later, say officials with Thomas Keller Restaurant Group. But the chef has been working with Seabourn for about a year and has already introduced a line of dishes served on the ships, including a duck foie gras terrine with truffle pain de gênes, compressed Asian pear and Sicilian pistachios; buckwheat gnocchi with tamari-glazed shiitake mushrooms, golden beets, savoy cabbage and yuzu; and Sonoma duck breast poêle with crispy rillettes, glazed Harukei turnips, pickled blueberries and red cabbage puree.

For dessert: a ginger and yogurt semifreddo with whipped green tea and lemon meringue; and a Champagne and granny smith apple trifle with crème Chantilly, vanilla custard and champagne jelly.

Keller has also brought in some classic comfort foods reflecting his childhood, such barbecue ribs served family style, a signature Napa Burger served poolside, and artisanal “Yountwurst,” paying tribute to the location of his signature restaurant The French Laundry.

Keller has shared some of his purveyors, and the ships have brought in the same same white porcelain dinnerware used by Keller group restaurants.

Seabourn has also brought in mixologist Brian Van Flandern, who has been asked to upgrade bar offerings and cocktail menus for the entire fleet. The Food Network dubbed Van Flandern  “America’s Top Mixologist,” and in 2004 he was part of the opening team for Keller’s New York restaurant Per Se as head barman.

Cruise lines are increasingly battling to win hot chefs with which to align their brands.