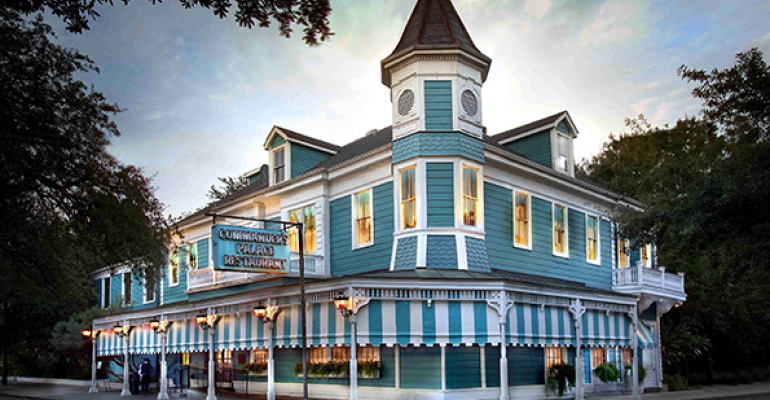 For nearly 20 years, Ti Adelaide Martin has been a co-owner of New Orleans icon Commander’s Palace, a restaurant that her mother, Ella Brennan, took over in 1974. She also operates sister restaurants Café Adelaide & the Swizzle Stick Bar and SoBou, also in New Orleans, as well as Brennan’s in Houston.

She also recently wrote a book about her mother (Miss Ella of Commander’s Palace: I Don’t Want a Restaurant Where a Jazz Band Can’t Come Marching Through), and worked on a feature-length documentary, Ella Brennan: Commanding the Table, directed by Leslie Iwerks, which premieres Friday.

Martin discussed those projects and the evolving local restaurant scene.

Tell me about the book.

I have long wanted to do a book about mom, mostly because everyone asks me, all the time, to do it, and she was completely uninterested in that and would just scrunch up her nose and look at me like "Don’t even think about it."

As I was working on that, a friend said, "You’ve got to do a documentary at the same time,” and I said, “She will never go along with that.”

Well, the documentary will premiere only because she fell in love with this Oscar-nominated documentary maker named Leslie Iwerks.

She’s a magnificent young woman. Her grandfather, a man named Ub Iwerks, started Disney with Walt Disney. So she started her career making a film about her family. Mom was so fascinated with her that she agreed to go along with it in a weak moment.

Anyway, it’s all done, and it’s all couched as the story of the modern American food movement, and I really feel like I had a front row seat, but I was just watching mom. It paints her story, but [in the context of] what happened in the whole hospitality industry and her place and New Orleans’ place in it.

And you also have a new book, right?

Right. To me they’re both a reflection of what we’re doing now. They show the two pillars of our company, which are hospitality culture and extreme creativity in the food.

For example, I just got back from Spain with three of my chefs and I think my chef at SoBou, Juan Carlos Gonzalez, is doing some of the most exciting food in New Orleans right now, and that’s saying something, because this town is on fire. He’s doing saltwater sheepshead crudo and tuna tartare with paprika oil and foie gras fondue. It’s crazy.

And we have our first-ever lady chef down at Café Adelaide, Meg Bickford. She’s just a future superstar, and we’re doing a great fun thing there called Breakfast at Dinner.

So, waffles and stuff at dinner?

She’s doing a sea salt-cured egg yolk and bacon fat-infused veal jus over chickory- rubbed veal. And of course we’ll have all the wonderful egg dishes. And at Commander’s [Palace] [executive chef Tory [McPhail] is doing a foie gras candle.

The trip to Spain was so inspiring for all of us.

At SoBou you also have that pay-by-the-ounce wine system. How’s that working?

It’s kicks, you know, because it allows you to do what we in the industry do, which is get an ounce of this, two ounces of that, and if you like it you can pour yourself a whole glass. We give you a little card and you can put it in the machine, and then you can see the wines there and you can just pick. We also have beer taps in your table, so that’s just fun.

New Orleans has a special role in American food. Unlike much of the rest of the country, before the current food revolution started New Orleans already had a rich culinary culture. How do you think New Orleans has adjusted to all of the new culinary influences?

I think it sort of started here. When my mom came in, the joke was New Orleans was a city of 500 restaurants and five recipes, and her dream was to make New Orleans the Paris of America. So she started pushing and evolving, and you see that straight up to today.

Jeremiah Tower, who’s in the documentary, did a menu in 1986 that a lot of us credit with being the first regional American-food dinner, and it was spectacular. He was at Chez Panisse and had this “aha” moment, I think: Why am I doing this food from France or Italy or whatever when I’ve got all this great food around me?

And that was really the beginning.

But then I looked back as I was putting everything together for the book and the film, and in 1983 mom and her family did a dinner, that I was at, that celebrated what we thought was the 100th anniversary of Commander’s. It turned out the years were a little off, but anyway it was three years before Jeremiah’s dinner and it was exactly that: It was American regional food, serving squab and the bread pudding soufflé that was invented by Paul Prudhomme. They were already doing that here.

Isn’t that wonderful? And that’s not going to stop. The Vietnamese thing [has been here] forever and the Korean thing is coming on. We’re embracing all of it. [In my restaurant group] we’re really exploring our Spanish roots — you know, the Spanish flag flew here for 50 years, and the French Quarter should really be called the Spanish Quarter because it was burned down and rebuilt under Spanish rule.

No wonder we felt so at home when we were just in San Sebastian.

We can mine the depths of New Orleans cuisine in so many directions, and that’s thrilling.