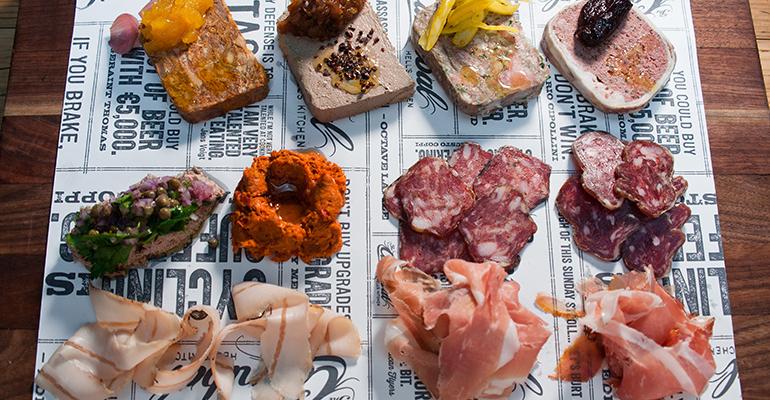 The Cannibal rides into L.A.

“You give a chef a butcher shop and a restaurant happens.”

That’s how chef Francis Derby describes the birth of The Cannibal in New York City, a concept created by Christian Pappanicholas and Cory Lane about four years ago. The Cannibal opened first as a butchery and beer shop named after a Belgian cyclist—Eddie Mercks, whose nickname was The Cannibal—and grew into a meat-centric restaurant using primal cuts and all the parts that come with it.

Now a West Coast version of The Cannibal is poised to open in the Culver City area of Los Angeles, and Derby, as executive chef of both locations, has plans to take the concept to a new level.

The Cannibal’s meat-centric focus won’t change, but given the spectrum of fresh produce available in Southern California, Derby says he feels compelled to expand on the plant-based side of the menu.

“We’re in California now and I feel like a kid in a candy store with the produce available here,” he says. “We serve a lot of meat, but at the end of the day, we don’t eat meat without vegetables.”

Like the original, The Cannibal LA will open first as a butcher shop, but with a larger retail component.

Guests will be able to buy house-made pâtés, pork chops, steaks or ground meat for burgers, for example, as well as proprietary sauces and spice rubs. The shop will also have a sandwich program with prepared foods, or catered platters for the surrounding office buildings, says Derby.

The adjacent restaurant, scheduled to open later this year,  will have 120 seats, including indoor and outdoor space.

The New York location has only 65 seats and basically no kitchen, other than two toaster ovens, a panini press and an induction burner, says Derby.

In Los Angeles, Derby is designing a fully loaded kitchen with a wood-fired grill, a combination oven, a smoker, a French top, a fryer and a plancha. “There’s a lot of gear. It’s really going to affect the menu,” he says.

Still, the emphasis on using the whole animal will remain the same, according to Derby. A pig, for example, will be broken down in house with the leg supplying ham for sandwiches, the belly for pancetta, the head for terrines and meat for sausages.

The Cannibal is known for fresh charcuterie, like Spanish-style blood sausage, as well as dishes like pâté en croûte. The menu in Los Angeles will include larger family-style feast offerings, like a whole lamb belly; a slow-roasted half pig’s head; or a 96-ounce ribeye that must be ordered a day in advance.

Small plates will be generally around $12-$14 with larger format meals around $65 and up, though designed for sharing. Or, guests can get away with a pretzel with scallion cream cheese for $5, says Derby.

The beer menu will feature more than 500 bottles from around the world, but not much on tap, he adds.

Derby says he hopes to see more locations of The Cannibal, though it depends on how this move to the West Coast goes.

“We’re really excited about this one,” he says. “Over time, you want to do more and more. I feel like we’ve been thinking about the concept for four years and it’s kind of nice to almost do it again and start fresh, in a way, without changing what we do.”