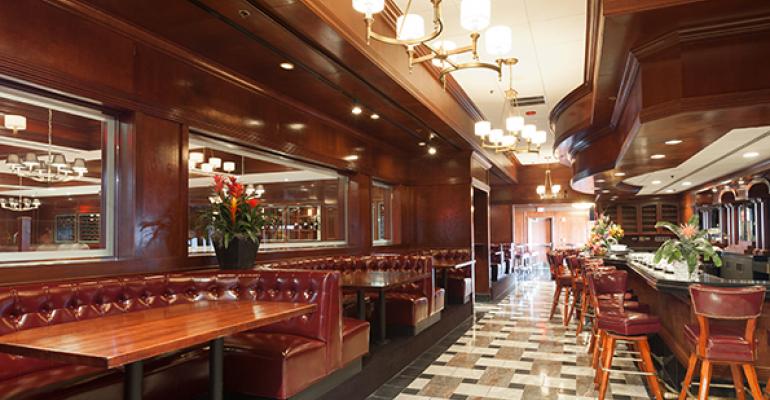 If you’re familiar with the Chicago dining scene, you know that Gene & Georgetti is one of the city’s legendary steakhouses. The restaurant—with its trademark red leather booths and white-clad, been-there-forever waitstaff—opened its River North neighborhood doors in 1941. Since then, Gene & Georgetti has not only served the likes of Frank Sinatra, Lucille Ball and Bob Hope, but its name still gets shouted around today in the eternal “Who has the best steak in Chicago?” debate.

The stalwart independent is part of an elite group, including the famous Gibson's, that has outlasted nearly all of its contemporaries as well as the rise of steakhouse chains in this beef-loving town. Now, after 75 years, the second and third generation owners, the Durpetti family, have opened a second location, a 250-seat restaurant with a 5,000-sq.-ft. event space in suburban Rosemont, IL.

Over the years, the family says it has left a bunch of expansion offers on the table. So why now, after three-quarters of a century, open a second restaurant? We asked Tony Durpetti (he’s married to Marion, daughter of founding partner Gene Michelotti) and his daughter, Michelle (she came onboard when the decision to open a second space was made last November) to talk about it.

After 75 years, why was this the right time to open a second restaurant?

Tony: We’ve been approached a lot in the past, but those were mostly partnership deals. We wanted our own deal so we could be in control. I never would have done it alone. I have a young family behind me (daughter Michelle, managing partner, and cousin Richard Ciota, GM), the offer was right (the property is leased from the city of Rosemont), and the location was right because it allowed us to have a venue space.

Michelle: My background is as a wedding planner (Michelle Durpetti Events, Chicago), so the offer of a restaurant and venue space was symbiotic. Also, over the last few years, as we’ve marked these big milestones, 60, years, 70 years, we’ve become acutely aware of how important it is that we drive the business. We took the business as far as we could at the downtown space. The next step was a second location, and this time we couldn’t say “no.” Obviously, we take our time with decisions!

Walk us through the new restaurant. How is it different and how is it similar to the original Gene & Georgetti?

Michelle: When you’re part of a restaurant family, your primary skill, in addition to running the business, is maintaining and restoring the brand when need be. We never overhaul the original restaurant; we maintain it. So when we opened in Rosemont, we asked: “How do we take the dynamic that exists within the walls downtown and bring it to the suburbs? So we took style and the energy and made a more contemporary play of the classic [restaurant]. The wood finishes, signature maroon-and-gold colors and the china are the same. We hired a classically-trained French chef (Luis Quiroz), versus someone from a steakhouse background, so the menu is slightly different while it still reflects the original restaurant. We took what we love about Gene & Georgetti and seized the opportunity to do something new and different. It’s a blend of our dreams with what we know works.

Tony, you could probably write a book on how to run a restaurant, but you’ve never opened one before. What were the surprises?

Tony: The downtown location runs itself in a lot of ways. There are employees who have been there for 40 years. You open a new business, with twice as many employees, and it’s a whole different world. We’ve never had to train this many people before.

Michelle: We also realized along the way that the word “culture” kept getting tossed around by our senior management who thought we needed to replicate the [original] Gene & Georgetti culture. My dad and I thought about it and said, “No, actually we don’t need to abide by it. It can have its own culture based on our traditions, but we resisted the urge to replicate. It’s not a franchise, it’s a second location, so we didn’t want to force it.

How are your jobs different now that there are two restaurants?

Tony: First, we own the property and the business in Chicago, and in Rosemont, we have investors. It’s a new responsibility. Many of our long-time employees came to us and wanted to invest, and we feel responsible to those who have faith in us. But my job hasn’t changed that much. There are more meetings, but I’m at the [original downtown] restaurant as much as I was before. Michelle started last year, and it’s nice that she has my back.

Any advice you can share with those thinking of opening a second restaurant?

Michelle: Have a good business plan and realize you’re only as good as the people around you. Have no ego, play to peoples’ strengths, and get ready for some late nights.

Tony: Obviously, do your homework and make sure the location is right—the neighborhood and the layout. Make sure you can get the people you need to staff it. If you want to be successful, surround yourself with good people.