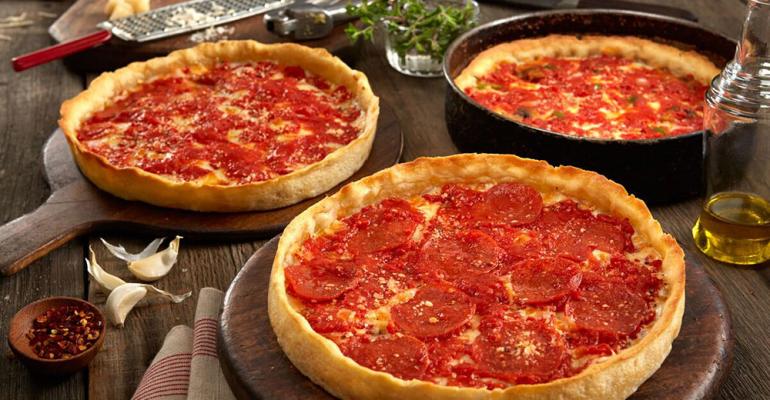 Photo courtesy of Lou Malnati’s
Lou Malnati’s, a popular purveyor of Chicago-style deep-dish pizza, sells its famous pies to customers around the world on a website it operates called Tastes of Chicago.
Operations

When only the real McCoy will do

One of the allures of online shopping is the easy access it provides to a vast assortment of merchandise that might not be available in a shopper’s local area.

Increasingly that luxury of the modern age is extending to restaurant foods, as operators create ecommerce ventures to ship product outside their own geographic regions.

For many operators, the strategy has been a vehicle to satisfy former customers who have relocated to new markets and miss the flavors of home. In addition, demand is being driven by consumers who learn about regional culinary specialties from travel and cooking shows that showcase unique local foodservice offerings, from Philadelphia cheesesteaks to Kansas City barbecue. Some operators choose to ship products with their components separated in order to preserve quality, but some customers say they also enjoy the experience of preparing their favorite foods at home. (Photo courtesy of Portillo’s)

“For us, it was really a response to the requests we were getting from people who wanted a taste of Pittsburgh,” said Marc Teklinski, director of operations at Primanti Bros., the Pittsburgh-based chain famous for its sandwiches made with the French fries on the inside.

After receiving requests for its fry-filled creations from out-of-towners on an almost daily basis for years, Primanti Bros. began taking a serious look at the idea of shipping to other markets about three years ago. The company spent about six months extensively testing various packing configurations and conducting rigorous temperature audits to verify that its products could be shipped safely, before launching a program that Teklinski describes as a success, both in terms of customer satisfaction and profitability.

“They are not huge margins, but we do make money on it,” he said.

Primanti Bros. partners with Goldbely, an ecommerce platform for foodservice operators, which provides the company not only with a venue to market and sell its products, but assistance in packaging, logistics and shipping.

Other operators have chosen to keep their logistics and ecommerce operations in house.

Northbrook, Ill.-based Lou Malnati’s Pizzeria, for example, operates a website called Tastes of Chicago, through which it offers a selection of its own famous deep-dish pizzas for sale to remote customers. The site also offers an array of the Windy City’s signature culinary specialties, including Italian beef and hot dogs from Portillo’s and cheesecake from Eli’s.

“The benefit for us is that we are a Chicago product, and this allows us to expand our presence,” said Meggie Lindberg, marketing and public relations manager for Lou Malnati’s.

In fact, she said, data from Tastes of Chicago ecommerce sales helped the company select Arizona for its first restaurant locations outside the Chicago area.

Lou Malnati’s makes its pizzas offered for shipping in a separate facility, and ships them frozen from its warehouse in Northbrook, Ill., along with the product it receives from Taste of Chicago partners.

Operators said starting out with a core menu of a few items that can be produced and shipped efficiently, safely and effectively can help such an operation get off the ground.

“We worked to identify not only our more popular items, but also items that travel well,” said Teklinski of Primanti Bros.

Joe Ariel, founder and CEO of Goldbely, suggested that operators seeking to enter the shipping business begin with one or two of their most iconic or popular items, or a bundle of such items, and then expand from there.

“We recommend starting with something small that is impactful and exciting,” he said.

Portillo’s Restaurant Group, which offers products for sale through its own website as well as through Tastes of Chicago, has found that its Italian beef sandwiches — a local specialty not readily available in many other markets — is by far its most popular item among its remote customers.

About 70 percent of the company’s orders are for its Deluxe Italian Beef sandwich package, which includes the ingredients needed to make about eight sandwiches, and sells for $79.95.

Portillo’s launched its foray into shipping — which emerged as an adjunct to its catering business about 17 years ago — by offering a menu of some of its most popular and easily shippable items, which were hot dogs, Italian beef and ribs. It added tamales to the mix in the last few years, and last year added chocolate cakes.

Operators have found that in order to ensure a quality product, they often must ship their products broken down into components that customers assemble at home.

Portillo’s customers who order its cakes, for example, receive two layers of chocolate cake with the icing on the side, along with instructions about how to apply it. Likewise, Portillo’s also ships its Italian beef sandwiches and hot dogs disassembled, with the meat and bread frozen and the toppings kept cool in carefully designed packages packed with gel ice.

Primanti Bros. follows a similar procedure to ensure the quality of its products, said Teklinski. One concession Primanti Bros. made was to use baked fries that customers pop in the oven before placing in the sandwiches, rather than ship a deep-fried product.

The home-assembly of the sandwiches has been well received by customers, according to Teklinski.

Developing an ecommerce system and managing logistics are among the most significant “pain points” that operators experience in seeking to establish a shipping operation, said Ariel of Goldbely.

At Portillo’s, the company works with a local technology provider called American Eagle, based in Des Plaines, Ill., which provides ecommerce websites for several food purveyors.

Shipping costs are another factor operators need to consider.

By using UPS exclusively, Wuchte said Portillo’s is able to minimize its costs through volume discounts. The company also strives continuously to find ways to pack its offerings more efficiently to reduce the size of its boxes, which helps contain costs.

“The best thing that has happened is that our volumes keep going up, so we can continue to negotiate better rates,” said Wuchte.

Goldbely, meanwhile, uses an algorithm to determine optimal shipping solutions for each order as part of the services it offers to its partners.

Shipping product internationally adds a whole new dimension to the enterprise — and is an area where few operators have ventured.

Katz’s Deli in New York City, however, is laying the groundwork for expanding its well-established shipping business beyond the U.S., according to Jake Dell, owner of Katz’s. The iconic eatery has been shipping its salamis around the world for more than 70 years — “Send a salami to your boy in the Army” is still a Katz’s slogan — and about 20 years ago opened up the menu to include a wide range of product for shipping within the U.S. Dell said the company hopes to be able to make product other than salamis available outside the U.S. by year-end.

“It is a matter of navigating and understanding customs world,” he said. “For now, we are focusing on customers at home.”

The company is expanding into a distribution center in Hackensack, N.J., where Dell said he expects shipping to become more efficient as Katz’s range of globally available products expands.

Shipping iconic foods provides customers with much more than meals — it provides an experience, said Ariel of Goldbely.

“People are buying for the nostalgia, the excitement,” he said. “It’s not just about buying food as a commodity, where you look for the cheapest deal available. It’s about connecting with something from your childhood, your memories.”