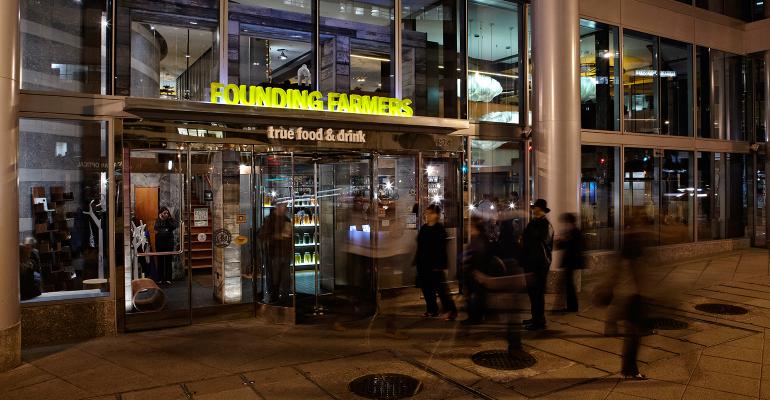 When farmers own restaurants

It’s one thing to tout farm-to-table as a way to support local farmers. But Farmers Restaurant Group in Washington, D.C. thinks table-to-farm, with a model that sends more in profits back to family farmers.

That’s the goal of the restaurant group, which was founded by North Dakota Farmers Union, or NDFU, a grassroots organization created to support farmers, ranchers and rural communities.

Farmers Restaurant Group is now parent to the Founding Farmers concepts in the Washington, D.C. area and in Pennsylvania. The group operates seven restaurants, including a bakery and creamery, as well as a distillery. But they also involve farmers in profit sharing: Ownership of the Farmers Restaurant Group is equally split between the NDFU’s 47,000 farmer members collectively, and restaurateurs Dan Simons and Mike Vucurevich.

Additionally, any family farmer across the U.S. can also partake in the profits by investing in the group’s individual restaurants.

Simons defines a family farm as one where the land and business are owned by persons, or family members, and where individuals make the business decisions.  By contrast, in farm operations owned by corporations, decisions are made by employees who serve at the pleasure of a board of directors.

“Equity ultimately defines the DNA and soul of your company,” said Simons, who adds that there is no minimum investment requirement for farmers wanting to invest.

“The mission of Farmers Restaurant Group is to pay family farmers more for the products,” Simons said. “Even if they don’t supply us product, farmers can partake in the profit sharing as investors. This model gives them a way to participate in the profitability of a food business that reflects their values.”

In the early aughts, North Dakota farmers began experimenting with different ways to get a larger share of the food dollar.

“We are so good at what we do that we over supply the marketplace, which drives prices down,” said Mark Watne, a fourth-generation farmer and president of the NDFU. “So we tried value-added projects like taking a grain to a flour, but that just brought us back to a commodity that was at a low-margin profit center.”

In 2005, the NDFU, taking advantage of consumers’ trending desire to rebuild a relationship with producers of food, opened a fine-dining restaurant in Washington D.C. with 200 farmer investors as an early version of the farmer-owned and farmer-sourced model. But the logistics of sourcing food from family-owned farm all across the country proved difficult, said Watne, and the concept soon closed.

To solve operational challenges, NDFU sought out restaurant consultants Simons and Vucurevich, establishing the Farmers Restaurant Group in 2007. A year later, they opened their first concept, Founding Farmers, in D.C.

“If you want to spread a message and influence people, D.C. is a good place to do it,” said Simons.

In addition to the original Founding Farmers location in the District of Columbia, the group now also operates Farmers Fishers Bakers and Farmers & Distillers in D.C. as well as three other Founding Farmers in Potomac, Md.; Tysons, Va.; and King of Prussia, Pa. The latter market also includes the First Bake Café & Creamery.

Simons said the core upscale-casual Founding Farmer concepts[AM1]  have a $32 average check and an average unit volume of about $13.4 million.

Each location is centered on connecting diners more closely with the food source, which they believe not only improves food quality but makes farming more financially sustainable. And those farmers, in turn, make more-sustainable choices about the environment.

Chicken, for example, is sourced from Bell & Evans [AM2] in Pennsylvania, a family farm run by a father and his children.

“The standards they follow — which I’ve seen with my own eyes — are incredible,” said Simons. “From when that chicken is born to when it is processed, it’s impressive — whether in food safety or caring about the animals.”

Watne, who farms 1,700 acres of oilseed, corn, soybeans, and grains on land homesteaded by his great grandparents, said family farmers are constantly focused on enhancing the soil and the quality of land so that it produces into the future.

“Our motivation — while it may be profit-oriented to survive — is also anchored by planning for future generations that need to be able to also make a living off the land,” he said.

While buying from family farmers empowers individuals who are more likely to protect the environment, getting those products from all over the country is challenging.

“We buy hundreds of tons of local products but we don’t take tomatoes off the menu when they’re no longer in season around here,” said Simons. “We’ll buy them from a family farm somewhere else.”

When they do use distributors, the group uses companies that are smaller, regional and family-owned. “The same way farmers think long term about their land, a family distributor thinks differently about their business,” said Simons.

The NDFU also recently bought its own 18-wheeler to truck food, such as flour, potatoes, and sugar beets, straight from North Dakota to D.C. in order to bypass other companies’ sales reps and brokers that take away more share of the food dollar from farmers.

The group is also trying to align with processing hubs in various states where farmers can take their product to get it into a form restaurants can more readily use and which provide a central pick-up for trucking.

Further aligning itself with the values of family farmers, the Farmers Restaurant Group uses green practices.

All of its restaurants are LEED certified, or are in the process of pursuing LEED certification. They also compost food waste, use no bottled water, donate used grease to be recycled into biofuel, use energy-efficient equipment, provide paper straws, and use tables made from reclaimed wood, among other environmentally-conscious practices.

As part of the group’s mission, they hope to unbundle the supply chain by cooking as much from scratch as possible, making everything from sodas, butter, spirits, bread, donuts and ice cream. The First Bake Café & Creamery produces bread using flour from the state mill in North Dakota, and the distillery Founding Spirits makes vodka from the wheat grown by farmers like Watne.

“Obviously the larger we get, the more we’re able to help farmers,” said Simons. “But instead of focusing on opening more and more locations, we’re interested in going deep on these topics. Shortening the supply chain by cooking from scratch gives farmers more of the food dollar, and the economic stability of American family farmers should matter to all of us.”